The English Premier League is off to a flying start, and after two weeks in the books the top of the table is populated not only by some clubs you’d expect to see, but also a few that are off to surprising starts. The third week of the season presents some of very intriguing matches; how good are teams like Bournemouth and Watford? We’ll get a much better idea at the conclusion of the weekend’s matches.

The weekly EPL Swarm, made up entirely of only knowledgeable fans of the sport, are off to a flying start as well. Last week the swarm posted a 6-4 record, narrowly missing a better record on late match heroics by Bournemouth and an absolute howler of an effort by United at Brighton. For this weekend’s matches, the swarm was greatly split in its confidence and conviction. 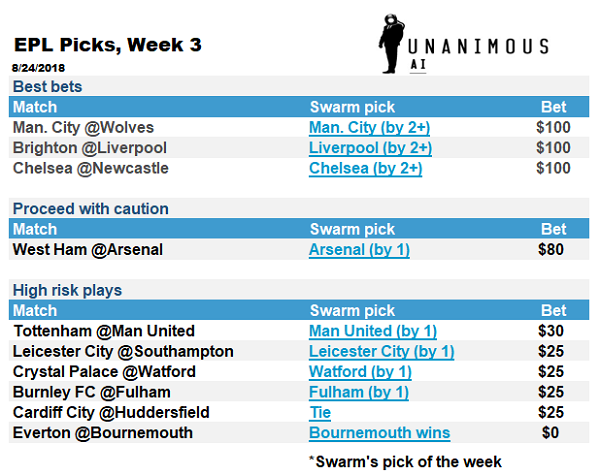 As the chart shows, this week the swarm really has only high confidence in three matches, and moderate confidence in one pick. Two of those three high confidence matches involve familiar clubs in that upper tier. Manchester City are the defending champions, and Liverpool appear to be the team best poised to challenge them this season for the top spot. But lurking just below them is Chelsea, the 2017 League Champions, and a club the swarm clearly recognizes to be off to a strong start as well.

Last year’s Chelsea side were stalwarts on defense, but struggled to put the ball in the net. This year they appear to be more balanced, and as the replay above shows, the swarm thinks they’ll handle things at St. James Park in Newcastle on Sunday. The swarm takes the puck to a two-goals-plus high confidence win for the Blues, and the magnets show some strong cohesion in picking them to take this match.