This weekend the Premier League returns from a one-week international play sabbatical with a full slate of games. Three teams enter play in week five with perfect records; Liverpool and Watford both face tough tests to their spotless seasons with matches against Spurs and Man United respectively. Chelsea, on the other hand, draw an overmatched Cardiff City squad, and may emerge on Monday as the top of the table leader in the Premiership.

For the season so far, the weekly Premier League Swarm has picked games correctly at a 68% clip (27 correct versus 13 incorrect), which would be a great result for contests with just two possible outcomes. Regular-season league soccer, however, allows for three potential outcomes with drawn matches, so a success rate approaching 70% shows just how hot this group of soccer fans have been across the first month of the season. Here are their weekend picks. 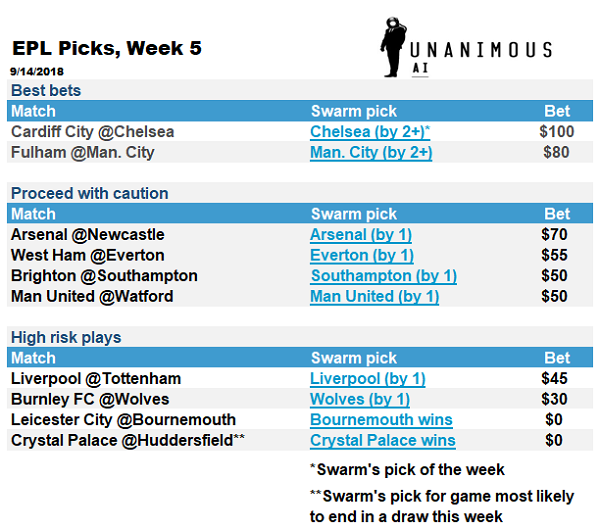 The early conventional wisdom in the League was that defending champion Manchester City and free-spending Liverpool were the two teams to beat this season. But Chelsea—the 2017 champions—had a solid transfer window themselves and already look more dynamic than last year’s scoring-challenged side. The swarm thinks they’ll have a rather easy time of it with Cardiff City on Saturday.

This match was chosen by the swarm as their pick of the week, and the replay above demonstrates that confidence. The magnets form an almost instant cohesive super-majority to take the puck to a Chelsea pick, and by at least two goals. The speed with which that decision was made and the conviction detected in that choice makes this the top pick for the weekend.