If Not Now, When? — AI Insight into the 2nd Amendment

WHEN IS THE RIGHT TIME TO DISCUSS GUN CONTROL?

On Sunday night, a lone gunman armed with 23 powerful weapons opened fire from a window on the 32nd floor of the Mandalay Bay casino in Las Vegas, targeting thousands concertgoers gathered for a country music festival below. Within minutes, the gunman had killed at least 58 people and injured nearly 500. There may be no more contentious issue in America than gun control, and no more emotional time to discuss it than in the days following a national tragedy like the one that unfolded in Las Vegas. But, a subject being difficult to discuss should not preclude us from trying to understand it, and fortunately nature has evolved methods for helping relatively simple organisms work through incredibly complicated problems with life or death consequences.

Swarm Intelligence allows groups of bees to converge on the perfect place for their hive nearly 90% of the time, and extending this power to humans through Unanimous AI’s Swarm AI™ technology empowers groups to create similarly optimized insight. With that in mind, researchers at Unanimous convened a group of more than thirty American voters ( 10 Republicans, 10 Democrats, and 15 Independents ) and asked them to combine their wisdom, intuition, and experience inside our Swarm AI platform to try to make sense of one of the most important issues facing the nation.

In the wake of what is now the most deadly mass shooting in American history, the familiar calls for – and against – gun control rung out immediately. But, as is often the case in the modern era, these arguments were made primarily on Twitter and in the media. No substantive discussions about gun control occurred on the floor of Congress. First, Unanimous researchers wanted to know, when is the appropriate time to discuss the issue?

As you can see in the replay of the Swarm above, the group of American voters quickly converged on “immediately / any time” as the appropriate time to discuss gun violence and legislation. But digging deeper, it’s not so much that the group found its way to that response that’s remarkable, it’s how overwhelming the support for “immediately / any time” was in comparison to the other choices. The Faction Analysis chart below, produced by our Swarm Insight® portal, reveals that, across party lines, the vast majority of the swarm members believe that now is the time to talk about gun control, and that majority only grew as the group considered the question.

Want to hear more about the Swarm AI platform that produced these insights? See our TED talk…

WHAT CAN CONGRESS DO?

Ultimately, the authority for addressing gun control lies with Congress. In 1994 a ban on assault weapons was signed into law. That ban expired in 2004, leading to both an increase in sales of the weapons and the frequency of mass shootings. So, with the group of voters having converged on the notion that now is the time to talk about gun control, the next question for the swarm by Unanimous researchers was, should Congress once again ban these sorts of high-powered weapons?

Here again the swarm of American voters quickly converges on an answer,  “Yes ( High Confidence )”, but this time, as befitting such a controversial issue, there is clearly a faction of the group that is pulling towards “No ( High Confidence )” with equal enthusiasm. The movement of the puck gives an indication of the relative size of these opposed groups, as Faction Analysis makes the proportions even more clear.

The natural follow up to this question is, will this Congress act to again ban assault weapons?, and the swarm’s response is unambiguous. Support for “No ( High Confidence )” is rivaled only by “No ( Low Confidence)”, demonstrating a high level of pessimism about this Congress’s willingness to address the expiration of the 2004 ban.

This pessimism echoes a sentiment that was laid bare in 2015 at Sandy Hook, where 20 children were killed in a mass shooting at their elementary school. As political commentator Dan Hodges wrote, “In retrospect Sandy Hook marked the end of the US gun control debate. Once America decided killing children was bearable, it was over.” When asked by Unanimous researchers whether or not that sentiment of, “if not now, when?” applied to the current situation, the swarm “mostly agreed.”

But while American politicians have been reluctant to act, other nations have dealt similarly horrific tragedies in much more decisive action. In 1996, a man killed 35 people in Port Arthur, Australia using semiautomatic weapons. But the Australian government acted quickly in the days following the crime to create a gun buyback program and outlaw semi and automatic weapons. In the 21 years since, Australia has not experienced a massacre. In the wake of the shooting in Las Vegas, Australia offered to assist the United States in implementing a similar program, and so Unanimous researchers asked the swarm of American voters whether or not the American government should follow Australia’s lead. Here, finally, we see a decisive response to a complicated question.

Here our Swarm AI platform clearly captures the group’s conviction that the US should accept Australia’s insistence and adopt its buyback and amnesty approach to high-powered weapons. The swarm was less certain of that program’s effectiveness in America, estimating its likelihood of replicating Australia’s success at 49%. That number might seem cynical, but compared to the near certainty that mass shootings will continue in America ( Las Vegas wasn’t the only one that occurred on Sunday ), a 49% chance of eliminating these horrors is actually quite hopeful.

A DEEP DIVE INTO A COMPLICATED PROBLEM

Because of the sanctity with which Americans tend to view the Constitution, gun control and its place in the 2nd Amendment remain a hotly contested issues, especially in the days following the tragedy we just witnessed in Las Vegas. With that in mind, researchers at Unanimous AI asked this swarm of bipartisan American voters to address the topic from all angles, producing deep insight into a complicated topic. You can see the full results of that research in the chart below.

Here is the Swarm’s Guide to the Gun Control Debate 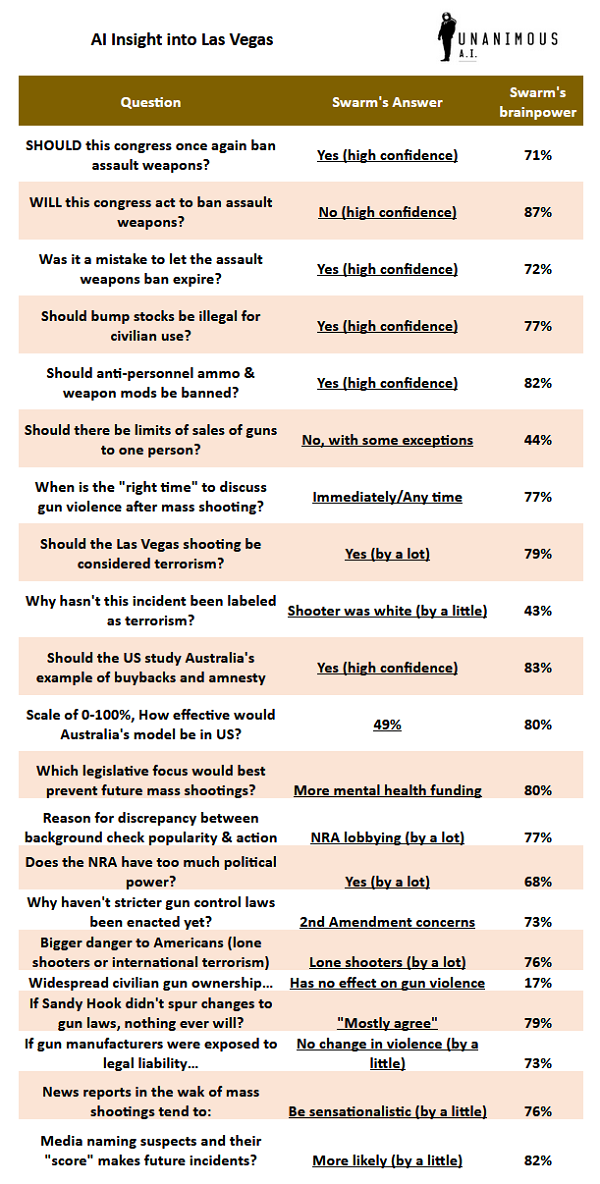 To learn more about our Swarm AI™ technology,  check out Dr. Rosenberg’s TED talk below…