AI Insight into Trump vs Mueller

WHAT DO FIRST INDICTMENTS IN HISTORIC INVESTIGATION MEAN FOR THE PRESIDENT?

Earlier this week, Robert Mueller’s investigation into potential connections between Russia and Donald Trump’s presidential campaign announced a pair of groundbreaking indictments and one guilty plea. Trump campaign manager Paul Manafort and his partner Rick Gates were indicted on twelve violations, including “Conspiracy Against the United States”, and the story was headline news on nearly every outlet except one. While Manafort’s trial won’t occur until May 7, 2018, the court of public opinion on Mueller’s investigation is already in full swing, with Trump’s labeling it a “witch hunt” and declaring via Twitter that, despite the ongoing investigation, “it is now commonly agreed…that there was no collusion between Russia and Trump.” In contrast, Democrats are proposing legislation to protect Mueller and his investigation from outside interference, including from the President himself.

While the nation waits for the investigation to play out, researchers at Unanimous AI turned to our Swarm AI™ platform for insight and guidance into the potential impact, and current perception, of the unfolding investigation. With so much disparity between the way the left and the right perceive Mueller’s investigation, our researchers formed a swarm of American voters ( 40% Independent, 30% Republicans, 30% Democrats) to combine their wisdom, experience, intelligence and insight inside our platform to make sense out of the chaotic news week. The results not only offer a glimpse into the American psyche, but also produced a remarkable bit of forecasting that demonstrates the efficiency of swarming.

First, researchers at Unanimous asked this swarm of voters to forecast the percentage of Americans who approve of Mueller’s handling of this historic investigation. Approval ratings for the President have been hovering near all-time lows this week, although his support among his base seems as fervent as ever. Would that same bipartisan behavior extend to Mueller? It’s important to note that the swarm was not polled for its opinion of the investigation, but rather asked to forecast the nationwide approval of Mueller’s investigation.

The swarm was given no guidance on public polling, and no information was provided in the swarm or during chat. And yet, this swarm of American voters managed to forecast Washington Post’s polling perfectly. As you can see in the image below, when the Post surveyed 1,000 people and asked them, “do you approve or disapprove of the way Mueller is handling this investigation?”, the results matched the swarm’s forecast almost exactly. This result is eerily reminiscent of the swarm’s perfect guidance of Trump’s 100 Day Approval Rating that was made for Modern Trader magazine in the weeks before Trump took office.

The President’s dismissed Monday’s indictments via his medium of choice, Tweeting, “Sorry, but this is years ago, before Paul Manafort was part of the Trump campaign. But why aren’t Crooked Hillary & the Dems the focus?????” in an attempt to distance himself from the legal troubles of his former campaign manager. The President is correct to note that the Monday indictments do not even mention him once, and his lawyers have expressed calm confidence all week long. But does that mean that the indictments will ultimately have never reach the President? To find out whether Trump would emerge from the Mueller investigation unscathed, our researchers once again turned to the swarm of American voters.

To see how the swarm converged on that answer, it’s helpful to take a look at the Decision Analysis provided by our Swarm Insight® portal. As you can see in the graphic below, the members of the swarm were evenly split initially, with the High and Low Confidence iterations of “Yes” receiving almost exactly the same amount of support. The “No” options were also equal to each other, but enjoyed far less support, and that support quickly dissipated over the 17 seconds it took to reach an optimized decision.

Robert Mueller’s investigation only came to be because Trump fired former FBI director James Comey. That controversial dismissal was potentially linked to Comey’s unwillingness to drop an investigation into ties between Russia and former Secretary of Defense Michael Flynn, and so many are wondering whether Trump might simply elect to relieve Mueller from his duties before the investigation runs its course. Between calls for Mueller’s removal from the right and Trump’s removal from the left, an odd sort of race has developed between the two most powerful men in Washington at the moment. Who then, Unanimous researchers wanted to know, would be more likely to leave office by the end of 2018?

Given the power of our Swarm AI technology to forecast horse races, Oscar races, MLB champions and more, it’s worth noting that the swarm of American voters believes that Mueller will be more likely to leave his current role than the President, although certainly how Mueller leaves and why will have a major impact on Trump’s presidency.  Below is a full recap of this week’s research into this landmark investigation. 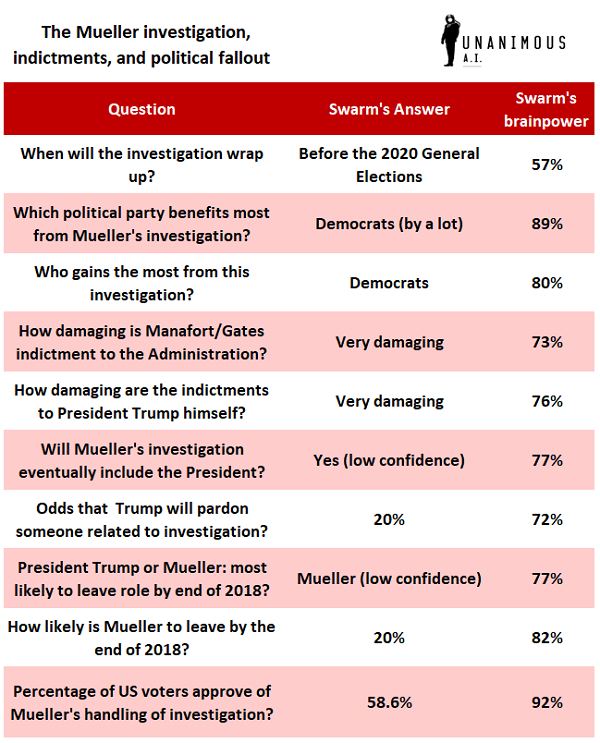 WSJ Praises Unanimous AI for Forecast of 2020 Presidential Election, Correctly Predicting all Eleven Battleground States
The Polls Got it Wrong.  Unanimous AI was Perfect!   As reported this week in…