Conventional wisdom among oddsmakers is that, all things being equal, a team playing at home can gain anywhere from a half point, to almost two points in scoring differential with an opponent. That’s why so often the odds favor home teams in contests.

Most weeks, our weekly NFL Swarm is sometimes hesitant to jump in with super high confidence for road teams, unless the swarm really does have strong conviction. Call this Road Warrior week, then, because many of the swarm’s most confident picks for week 11 of the NFL season are teams playing on the road. Here’s how the swarm sees this weekend’s games. 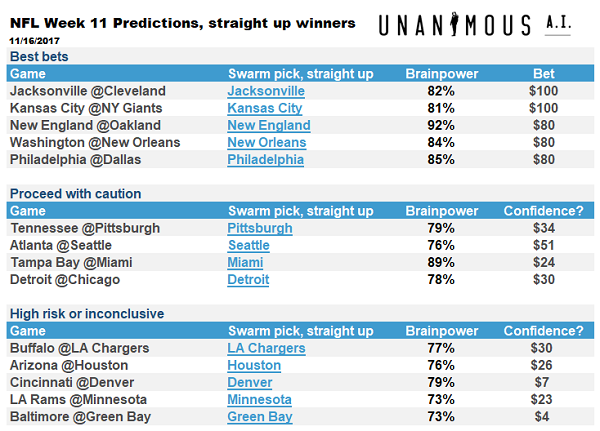 The swarm’s pick of the week this week is Jacksonville – on the road – at Cleveland. Since it feels like piling on to be featuring the poor Browns and whatever team is playing them in this space each Thursday, this week we’ll talk about the swarm’s second highest-confidence play of the week. That game has the Kansas City Chiefs playing on the road at New York. The Giants appear to be a team in total meltdown mode, and the Chiefs need to beat clubs like the Giants to improve their postseason fortunes.

The swarm likes Kansas City across multiple vectors of expressing confidence. Even though the Brainpower isn’t super-high, that’s mainly a function of trying to get to a high confidence pick in the replay above – but the magnets are all on the Chiefs’ side of the hex. The swarm also put a double-digit points margin on this game, and assigned it their highest betting confidence at 100.

While playing against point spreads is a high-risk proposition, we’d be remiss if we didn’t take a look at how the swarm breaks things down there. 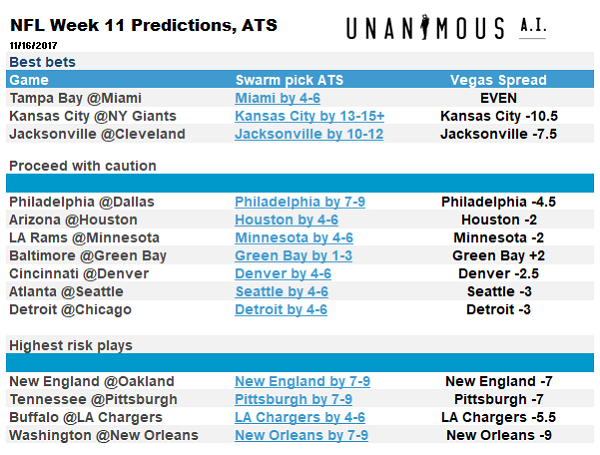 Frankly, we’re not sure what to make of the NFL Swarm’s affection for the Dolphins this week, but Vegas has this game even against the spread, and the swarm thinks Miami can take this one.  They even liked this game straight up, so at an even spread this could be one to take a look at, especially given that the swarm thinks the Fins will win by more than a field goal.