With week 15 of the NFL season upon us, things are truly in crunch time now. There are at least a dozen teams in each conference that are either in the playoffs or have some hope of getting in. Those teams vie for the few remaining spots, as well as attempting to secure a precious first round playoff bye. There are teams on the outside of the playoffs looking in, too. Those clubs would love to play the spoiler’s role in the final three games of the season.

Those are some of the factors the weekly swarm of NFL fans who gather on Unanimous AI’s Swarm AI platform had to take into account: playoff teams fighting for their lives and teams on the outside of the postseason chase giving a good look to young, enthusiastic players looking to prove they belong in the league. Here’s how the swarm sees things shaking out this weekend. 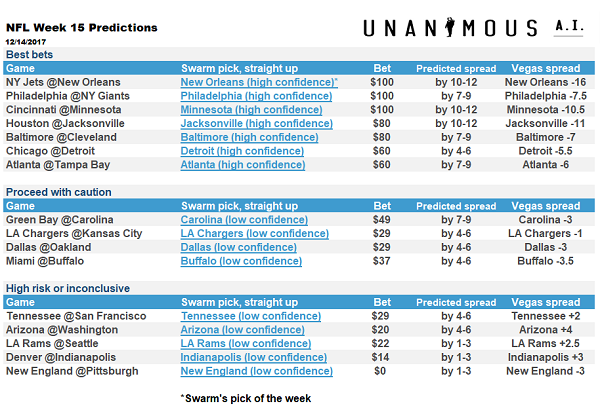 At the top of the chart is the swarm’s pick of the week. For this weekend, that’s the New Orleans Saints, who host the New York Jets in a game that on paper looks like a mismatch. The Saints need a win to stay atop the competitive NFC South, while the Jets are out of the playoff hunt, while having performed much better this season than many observers expected.

The swarm’s pick of the Saints here is just bursting with confidence, as you can see. We’ve got a high-confidence win prediction, with a very high number of magnets pulling the puck to the New Orleans side of the hex. That, along with the wagering confidence the swarm uses, are two of the single best indicators (along with the “high/low” confidence indication) in our research of a prediction the swarm thinks will come true. The Saints top our chart due to a $100 bet confidence and a victory of the Eagles/Giants matchup in the Pick of the Week deliberations.

Included in the chart is the predicted spread the swarm selected, as well as the Vegas spread at the time the swarm took place. Using that information, anyone interested in making a high-risk play against the spread can pick and choose some battles to fight. One that stands out in that regard is the Panthers game, when Carolina hosts Green Bay. Aaron Rodgers returns to the Packer lineup for this one, but the NFL Swarm seems to think the Panthers will be too much for them. So although the Vegas spread is -3, the swarm favors Carolina by at least a touchdown in the game on Sunday.