AI Picks for the NFL: Week 3

Of all that has been written about Hollywood, perhaps no statement is more accurate or more oft-quoted than William Goldman’s declaration that, “Nobody knows anything. Not one person in the entire motion picture knows what’s going to work. Every time out it’s a guess, and if you’re lucky, an educated one.” The same could certainly be said for the opening weeks of the NFL season. Past performance does not guarantee future results, but in the early days of a new campaign, forecasters must rely heavily on how teams finished last and extrapolate how off-season maneuvers and developments might play out.

This is, of course, much harder than it sounds. Who could have predicted the Patrick Mahomes phenomenon in Kansas City, or the rise of Fitzmagic in Tampa Bay after Jameis Winston’s suspension? Mahomes threw more touchdowns than anyone in history in his first two starts, and under Ryan Fitzpatrick, the Buccaneers, who began the season #28 in ESPN’s power rankings, have now beaten the #1 and #5 teams in those same rankings. To date, the 2018 NFL Swarm is just over .500 picking winners, and more information should make for more accurate forecasting. Last night’s matchup between the Browns and the Jets went almost exactly as the NFL Swarm predicted, which suggests that the season just might be coming into focus. 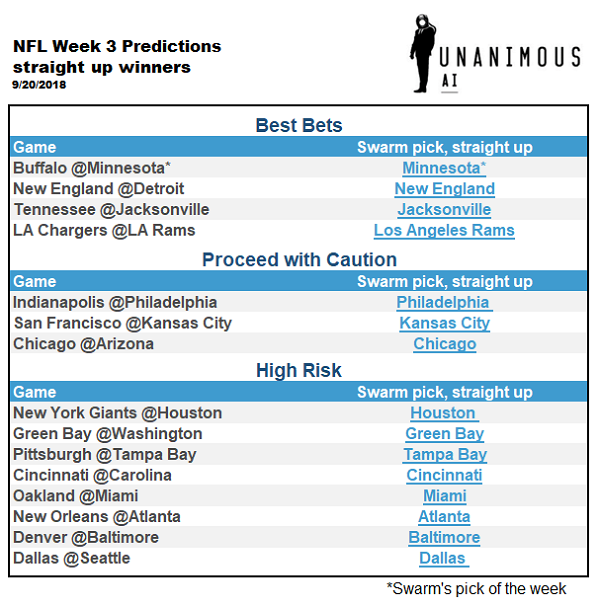 There was very little drama in this week’s NFL Swarm for the title of “most confident pick” in the Straight Up category. The Vikings are 1-0-1 after beating the 49ers and battling Aaron Rodgers’ high-scoring Packers to a draw, but their opponent, the Buffalo Bills, has been fairly unimpressive so far. In Week 1, the Bills fell to the Ravens by 44 points, and were only slightly more competitive in home loss to the Chargers. Vegas sets the Vikings up as an ultra-rare 17 point favorite, and the NFL Swarm agrees this one should be a W for Minnesota.

If it’s difficult to forecast winners in the first few weeks of the NFL season, it’s downright masochistic to try and do the same Against the Spread. Still, our brave NFL Swarms have done an admirable job, and sit in the middle-of-the-pack compared to experts at ESPN and CBS Sports through Week 2. After a similar start in 2017, the NFL Swarm quickly found its stride en route to an excellent run through the heart of the NFL season. 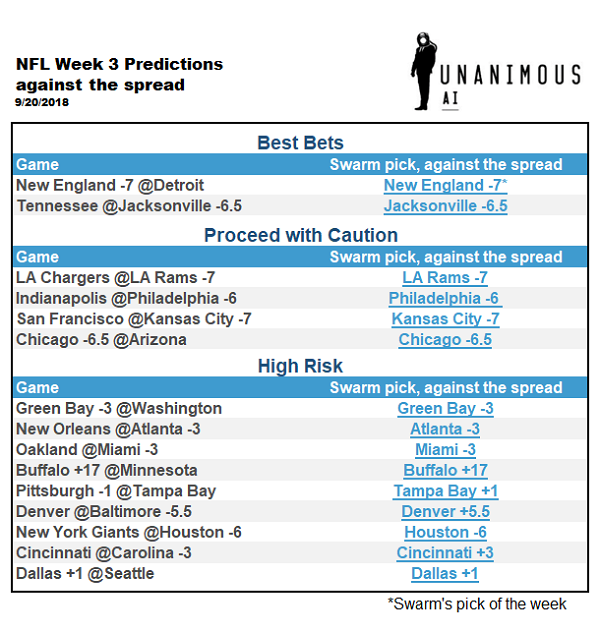 All that said, the 17 points that Buffalo is getting is almost unheard of in the National Football League. So, while it’s true that that the Bills have failed to cover in either of their first two matchups, if Goldman is right, that also suggests the corollary, “anything can happen.” With that in mind, there’s almost no value in actually wagering on the Vikings to win as 17 point favorites ( a $100 bet would pay all of $5 ), and any wager involving the Bills should be considered “high-risk” at this point, there is value in taking Buffalo plus all those points in a realm where no one knows anything.