One of the NFL’s better-kept secrets is just how close the talent level around the league across different teams actually is. Although the grind of a full season will eventually reveal the league’s best and worst squads, often the skill differences between those two groups is smaller than it might appear. In any game, mundane occurrences like poorly-timed penalties, a receiver or defensive back falling down, or just a missed assignment can result in a game-changing event that materially alters an outcome.

That reality creates the kind of volatility we saw in the NFL in Week Three. Despite some incredibly unexpected results, the NFL Swarm still managed to finish above .500, which was as good or better than any of the experts at ESPN managed. To put it another way, for the 2017 NFL season to date, the Swarm AI platform has taken a bunch of casual NFL fans and made their game prediction skills the equal of professional game analysts who study the minutiae of individual football contests in great detail for the biggest sports network in the land. 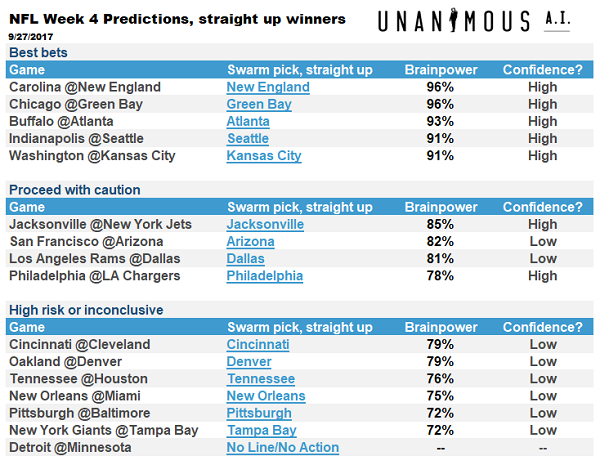 This week’s NFL schedule has a number of rivalry games that should draw a lot of fan interest. The Steelers and Ravens always seem more like a brawl than a football game. The Raiders and Broncos are a traditionally spirited match-up, and even if both Ohio teams are winless on the year, Cincinnati and Cleveland always go after one another like a couple of wet cats trapped in the same pillow case.

Of all those rivalry games, however, the only one the swarm sees a lot of confidence in this week is the meeting at Lambeau tonight between the Bears and Packers. As the replay above shows, the swarm seemed to brush off the week three results, where Chicago upset the visiting Steelers and Green Bay needed overtime to dispatch the Bengals. There’s a great deal of cohesion not only pulling the puck to the Green Bay side of the hex, obviously. But look at the way the large group of magnets are bunched in pulling the puck to the high confidence answer also. The swarm feels pretty good about this one. 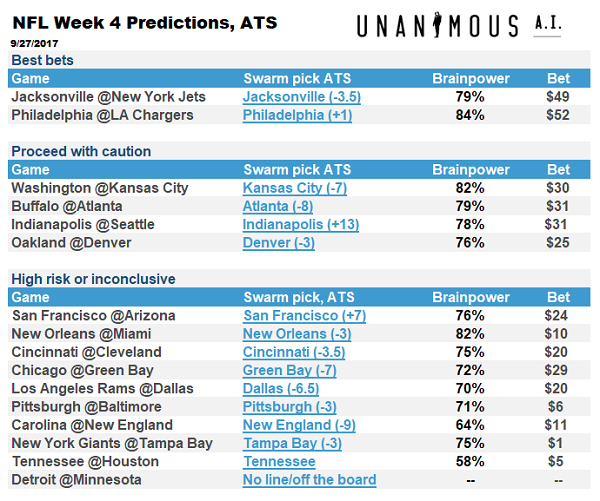 With all the turbulence present in the first three weeks of the NFL season, playing games against the spread continues to be an inherently high-risk proposition. The confidence is fairly low on most games this week, making it difficult to for us to recommend many of these games based on the response by the NFL Football Swarm. With that caveat in mind, the swarm thought the Jags only being given a 3 ½ point markdown against the Jets was a potential opportunity for a win. They made it their best bet spread play for the weekend.