If week three’s NFL results were full of surprises, in the season’s fourth week last Sunday, things started to sort themselves out just a bit. The NFL Swarm acquitted themselves nicely by posting a 10-5 overall record straight up for winners. That put them in a tie for third for the week among ESPN’s eight professional analysists in picking the weekend’s games.

With each new turn of the page in the NFL schedule, our individual swarm participants gain more data and learn more about the real abilities of the teams around the league. For instance, remember when New England was deemed unbeatable heading into the first week of the season? The swarm has seen enough of the Patriots’ terrible defense now to only have middling confidence that they’ll even win straight up in Tampa on Sunday. Here’s this week’s entire chart for straight up winners. 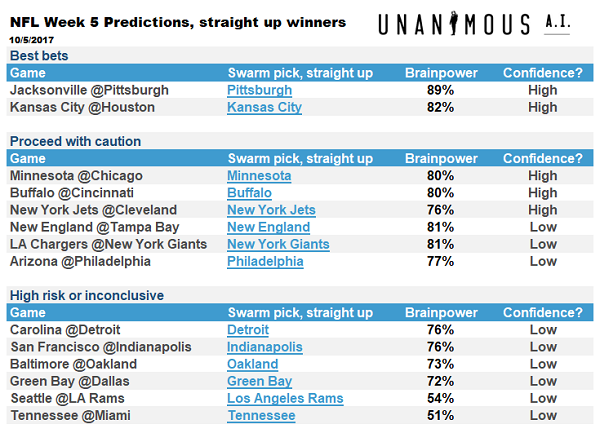 The swarm made the Chiefs their pick of the week again this week, but we’d like to take a look at their other high confidence prediction for Sunday. Jacksonville has been an enigma all year. In London two weeks ago they easily dispatched Baltimore. Last week, however, against the Jets, they managed to drop what looked on paper like an easy win. Pittsburgh, on the other hand, bounced back strong last week in Baltimore. The NFL Swarm predicts they’ll play well at home, and in the replay below we see a rapid convergence form to make the Steelers a high confidence pick. 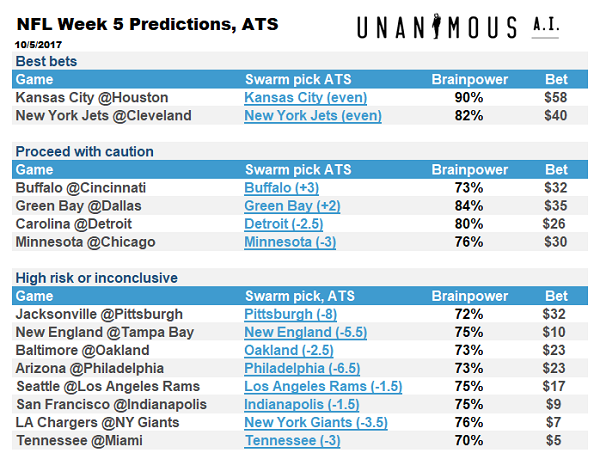 We already know the swarm like Kansas City down in Houston this weekend, enough so that they made this straight up play a high-confidence prediction against the spread when offered even odds. The other game the swarm expressed some confidence on in this manner is the Jets (who are a surprising 2-2) in Cleveland to take on the Browns. Given another even point spread, the group felt like this was a good opportunity to pounce with a reasonably high hypothetical wagering confidence.