The young NHL season has featured many familiar sights – Ovechkin off to a torrid start in Washington, Chicago sitting atop the hyper-competitive Central division—and also some head-scratchers. New Jersey and Colorado apparently missed the memo proclaiming them both league doormats…and even those surprises don’t come close to the storybook first month of existence for the Vegas Golden Knights.

In the first week of swarming hockey games, the group of NHL fans convened by Unanimous A. I. researchers got off to a solid start, predicting five of their first seven games correctly. As the standings start to shake out a little bit now, those group participants have to reconcile some preseason expectations with in-season performance. Here’s how the swarm predicted tonight’s contests. 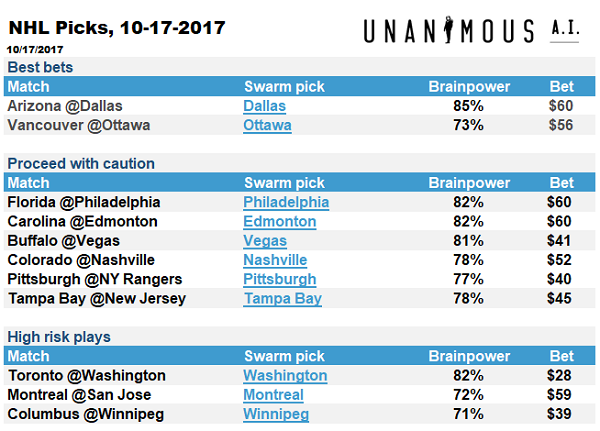 As you can see, the NHL Swarm is fairly stingy here about embracing too many games this early on in the NHL season. Dallas gets the nod as out top recommended play due to the swarm showing a high degree of Brainpower here. In the replay you can see the magnets pulling with a great deal of convergence to the Dallas side of the hex with most of the indecision being a struggle between a 1-goal or 2-goal win. The swarm later affirmed their confidence in this prediction with a $60 hypothetical bet confidence, while also making it their pick of the night.

We’ll be holding weekly NHL swarms and paying $25 to the highest performing member of the Swarm? Want to join the Swarm or see the picks? Click the button below…