Sportspicker AI 6-4 Against the Spread in Upset-Prone Week

Week 4 of the NFL season is complete, and so is the second week for Sportspicker AI – NFL. And what a week it was. The AI model was profitable for a second straight week.

The Sportspicker AI model predicted 14 games AGAINST THE SPREAD and recommended bets on 10 of them. The model was 6-4 on those picks, for a 60% ATS winning percentage. (Compare that to the 55% rule-of-thumb benchmark for professional handicappers.)

And members who leveraged Sportspicker AI proprietary PICK RATINGS to allocate their bankrolls earned a 10.4% return on investment, even after the sportsbook took it’s standard 10% juice. See chart below.

That would be very good ANY WEEK, but it’s particularly good THIS WEEK. Why? Well, this week, most gamblers got CRUSHED, especially on two games–Patriots/Bills and Chiefs/Lions. America’s largest sportsbook William Hill reported almost 90% of money was on the favorites in these two games, but both failed to cover the spread.

The Sportspicker AI model did not care for those favorites. Its contrarian advice was to avoid the Chiefs/Lions game altogether, and to bet on the underdog Bills vs. the Patriots. Smart move… but that wasn’t all. It also recommended significant investments on the underdog Raiders and Jags, both of whom not only covered the spread, but actually won their games outright. 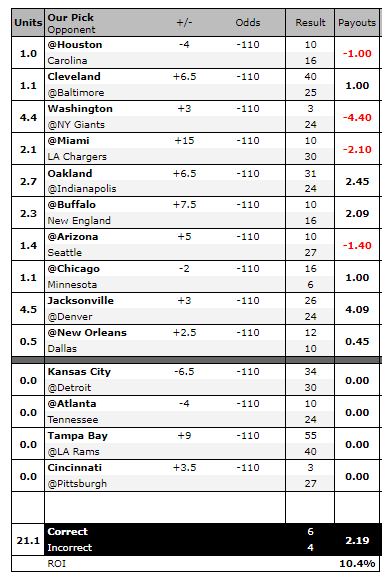 So it was a very good NFL week. On a week when most bettors got kicked in the teeth, Sportspicker AI members actually came out with a double-digit positive ROI! And according to the Sportpicker AI team, this is just the beginning. After every week of picks, the AI model ingests more data and uses machine learning to self-improve.

So if you’ve been thinking about checking out Sportspicker AI – NFL, but wanted to see some proof, NOW is the time to jump on board. Click the button below to learn more and sign up today.

And by the way, it was an even BETTER weekend for English Premier League soccer picks. The Sportspicker AI model was 7-0 in the EPL, with an ROI of 39%! Click this link to learn more about Sportspicker AI – EPL.