As the college football season draws to a close, two familiar faces step to the top of the podium. The first is Nick Saban, whose Alabama team delivered to him his sixth career national championship. The other, of course, is the Swarm AI technology created by Unanimous AI, which finishes bowl season with a Saban-like 9-2 record and a blowout victory over the experts at ESPN and NCAA.com. As luck would have it, one of the few missteps offered by the AI Guide to College Football this postseason was the prediction that the Crimson Tide would fall to Clemson in the semifinals, but the Swarm AI system was not about to make the same mistake twice.

The chart below captures the 11 predictions created by Unanimous AI for the major college football bowl games. As you can see, these Swarm AI platform was remarkably accurate in these 11 contests, underestimating only the aforementioned Alabama team and the undefeated UCF Golden Knights in their matchup against Auburn. Because the intention in bringing Swarm Intelligence to humans is to turn groups of all kinds into “super-experts,” the predictions offered by ESPN and NCAA.com have been recorded alongside the Swarm AI insight. 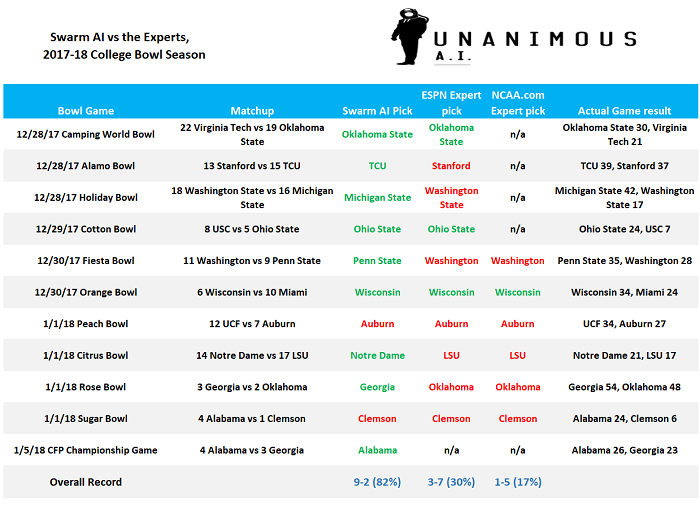 The number that should jump off the page here is the overall accuracy of the three sets of picks. Through 10 games, the Swarm AI system produced winners at at 80% clip vs the 30% and 17% on offer from the experts. That gap only widened when the group reconvened to predict the national championship game and corrected its earlier underestimation of the Crimson Tide. No equivalent pick was published, but even if given the benefit of the doubt, ESPN and NCAA.com’s rates of accuracy would only bump to 36% and 28% respectively. That means that anyway we consider the data, Unanimous AI was able to more than double the accuracy of the insiders who write for ESPN and NCAA.com for the major college bowls.

With that in mind, the researchers tip their hats to Nick Saban, who is now being talked about as the greatest coach in all of football history. But, at the same time, when considered alongside similar success at the Super Bowl, the Kentucky Derby, and last year’s college football bowls, it’s fair to wonder whether Unanimous AI isn’t creating a dynasty of its own.