Heading into Monday Night Football, the Week 10 NFL Swarm has continued its recent dominance. The chart below shows the swarm’s predictions for this weekend’s action and, after the Steelers’ comeback victory, the team here is happy to announce that all four “Best Bets” on their games. As always, true forecasting intelligence goes beyond picking winners to identifying when to make a pick and when to stay away. 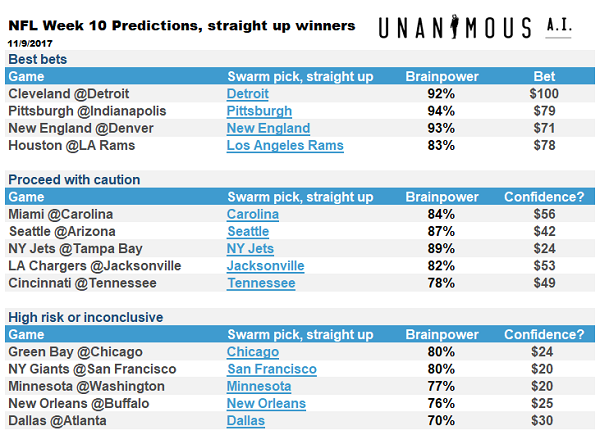 Not only that, but with Detroit’s victory of the Cleveland Browns, one lucky member of the Swarm cashed in a 5-team parlay that earned him a 177% Return on Investment. Of course, with Seattle, the NFL Swarm’s sixth-highest rated pick, still to play, another member of the swarm is sitting on a potential 7 team parlay that would pay a tidy 460%. Here’s hoping that sort of courage pays off tonight.

One last thing before you turn the game on. One of the hallmarks of Swarm Intelligence is that feedback empowers the swarm to reassess its position in ways that polls fail to capture. In the case of the NFL, that could mean the opportunity to Live Betting + our Swarm AI technology to truly amplify both intelligence and winnings. In the case of one member of the Swarm, reaffirming the Swarm’s “Best Bets” as the games unfolded and the odds changed produced a four team parlay with a 400% Return on Investment. Not bad for an afternoon on the couch.