Last week, researchers at Unanimous used their Swarm AI® technology to produce the AI Guide to College Football Playoffs, which featured AI-enhanced insight into ten major college bowl games, including the College Football Playoffs. The insights were generated by optimizing the wisdom of a group of college football fans using AI algorithms, amplifying their intelligence in a process that mimics the swarms in nature. This process has been shown to turn groups of average people into an artificial “super-expert” capable of transcending their own individual limitations.

Now that the final whistle has blown on every game except the College Football Championship, it is possible to see just how well the Swarm AI technology was able to fulfill its promise to produce expert-level performance from a group of average people. First, let’s take a look the insight produced by the Swarm AI system. In the chart below, games in green were successful predictions. 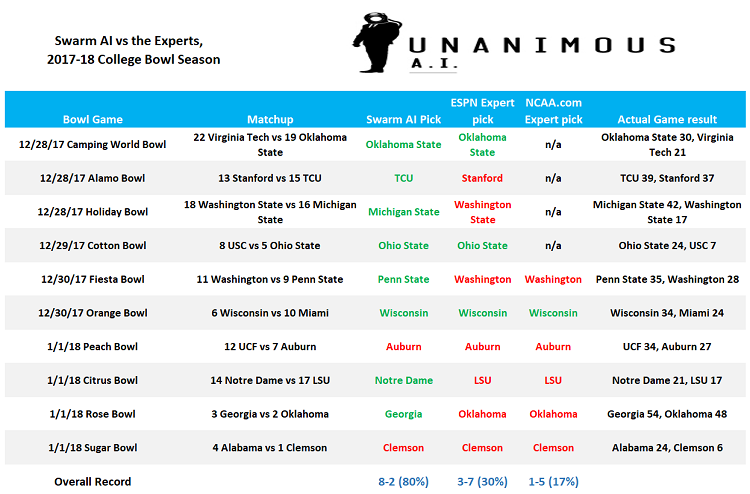 As you can see, the AI, which was perfect until New Year’s Day, finished an excellent 8-2, with two out of its three High Confidence picks and three out of four recommended picks all winning. The Swarm AI also offered some uncanny insight into the Rose Bowl between (3) Georgia and (2) Oklahoma. As described in the AI Guide to the College Football Playoffs, this matchup featured a high-powered offense against one of the best defenses in the country in what would surely be an exciting clash. After a heated virtual negotiation, moderated by AI algorithms, the Swarm AI platform predicted that Georgia would win with “Low Confidence.” Anyone who saw the 2OT thriller at the Rose Bowl knows that predictive intelligence simply doesn’t get more accurate than that.

So, how did the research produced by the Swarm AI system compare to the experts? To find out, researchers at Unanimous AI compared their results with the predictions made by the highly-paid experts at ESPN, home of the College Football Playoffs. As it turns out, if the goal of Swarm Intelligence is to elicit expert-level performance from average people, then it might be time to move the goalposts. Not only did the Swarm AI system beat the ESPN experts, the matchup wasn’t even close. The ESPN experts went just 3-7 across the same ten major college bowl games where the Swarm AI system went 8-2. That means that the group of college football fans were more than twice as intelligent as the experts they watch and read on ESPN. This 167% bump in predictive accuracy demonstrates just how insightful groups can be when working together inside the Swarm AI platform.

The ESPN experts also got both halves of the College Football Semifinals wrong in predicting that Oklahoma would play Clemson for the national championship. In that, ESPN was not alone, as predictions published on the NCAA’s own website also foresaw a Sooner-Tiger clash for the title. The experts behind the NCAA’s predictions only predicted six of the ten games that Unanimous AI tackled this year, but managed to get only one out of six right. Here again, the Swarm AI proves not to match expert-level performance, but to improve upon it exponentially. These results echo last year’s research, when, a similar group of 75 college football fans beat the ESPN experts handily in the major college bowls.

Later this week, researchers at Unanimous AI will be turning their Swarm AI technology loose on the College Football Championship game.