The Swarm knows football. That much is clear after last week’s incredible 477% profit and spookily accurate guidance on which games to avoid. Basketball, too. We saw that last week, too, when the NBA Swarm went 9-2 ( update: two weeks in a row ) and nailed its only High Confidence pick of the week. But if you needed any more evidence that the swarm’s expert level forecasting is sport-agnostic, look no further than this weekend’s performance in the English Premier League.

Now, the EPL Swarm is no stranger to profit. Anyone who was with the swarm’s recommendations a few weeks ago could have taken home a 1,900% ROI. Generating that kind of return might seem like it requires exotic wagering schemes or prop bets, but, there’s no need to complicate things. Sticking to the EPL Swarm’s recommended picks has proven to be a sound strategy, since good forecasting goes beyond just picking winners, but also knowing when confidence is appropriate, and when it’s not. As you can see in the chart below, last week’s EPL Swarm deemed four games to be “Best Bets” and another two as recommended “Proceed with Caution.” 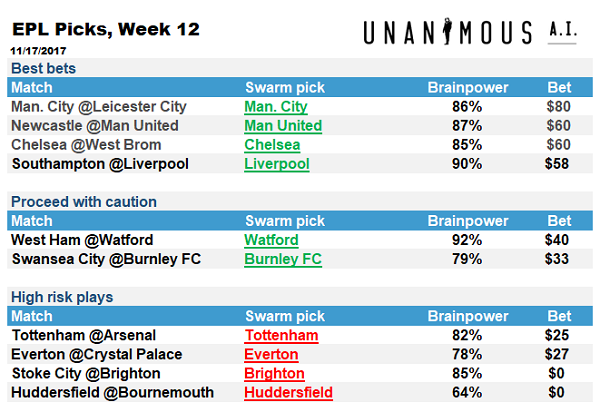 I KNOW WHAT I KNOW

So, what would happen to a hypothetical bettor who put the four Best Bets into a parlay? As you can probably guess, one member of the EPL Swarm did exactly that, producing a tidy 255% ROI when all four Best Bets were winners. You can see that wager at the bottom of this blog post. But why stop there?

As you can see above, this week’s EPL Swarm didn’t just connect on its four Best Bets, it also delivered on its two Proceed with Caution picks, meaning that all six of its recommended picks were successful. As the betting slip below reveals, a six team parlay with all those teams included paid a handsome 477% return.

One final point. As we’ve said, knowing when you’ve got enough insight to make a wager is the calling card of the intelligent forecaster. Clearly this week’s EPL Swarm demonstrated remarkable self-awareness in labeling those six games as worthy of betting consideration. But, the results from the “High Risk or Inconclusive” picks are just as wise. The EPL Swarm noted that on the four remaining games, it could offer no insight worthy of a wager, and each of those four games went against the swarm’s lukewarm pick. In other words, a bettor who followed the Swarm’s picks in any configuration could not have lost money, and one who ventured into the “Inconclusive” picks coudn’t have won.

WSJ Praises Unanimous AI for Forecast of 2020 Presidential Election, Correctly Predicting all Eleven Battleground States
The Polls Got it Wrong.  Unanimous AI was Perfect!   As reported this week in…