From late November through early January, the Premiership schedule becomes a grueling test for clubs around the league.  For the next month or so, there will be midweek matches, cup ties, and (for teams who qualified) contests in the Champions League to fill the calendar.  That forces managers to mix and match players while making liberal use of their benches to keep a fresh team on the pitch as much as possible.

Because of that, over the next month we should start to see some real separation between the top third, middle tier and relegation zones in the League table. Teams that aren’t deep enough will start to fall by the wayside, as injuries and fatigue take over. The swarm, mindful that this weekend’s games are the third match in 10 days for most teams, made the following predictions. 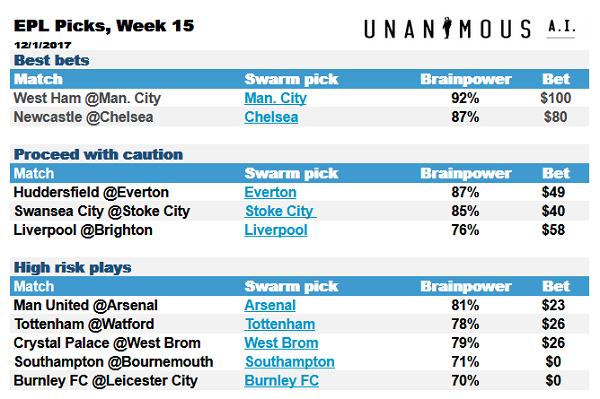 Manchester City’s game at home against a woeful West Ham side appears to be a complete mismatch and is the swarm’s pick of the week. As the chart shows, however, there should be a lot of confidence in Chelsea at home against Newcastle also. Although the Magpies played very well early in the year, they’ve struggled for the last month as injuries and depth issues have depleted them. The swarm picked Chelsea here with a Brain Power above 85% and a high hypothetical dollar confidence to match, making this only a slightly less confident pick than the Man. City prediction.