After a week’s absence for FA Cup matches, replays and a Manchester City trophy win in the Carabao Cup, the EPL returns to league play this week with some intriguing games. This is the time of year when teams have to balance themselves between remaining cup ties, Euro play and also maintaining fitness in League matches. Concern over some quick turn-around games was certainly on the minds of our weekly swarm of Premiership fans. 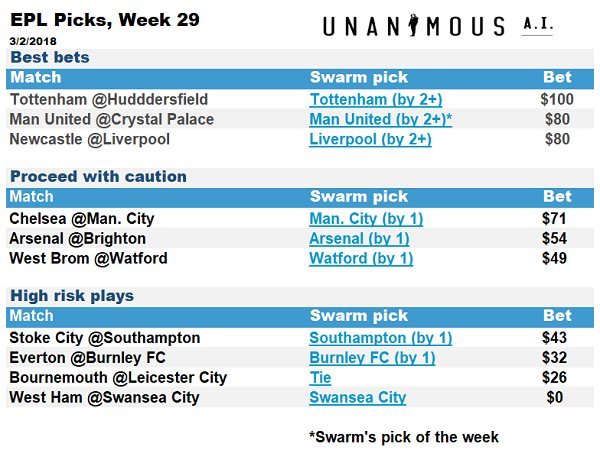 As the chart shows, the swarm really likes City in a tough match at home against defending champs Chelsea. But in chat during the swarm, concerns were voiced over the Sky Blues having played three games in just a week, and how that might affect things against a tough club. Thus, the group picked United (just barely beating out homestanding Tottenham) for the Pick of the Week rather than the league leaders.

Although United have occasionally bottled a match here or there when playing away from home, this weekend they travel to Selhurst Park to play an injury-devastated Crystal Palace side. The swarm hesitates just briefly before coalescing on a Man United prediction at 2+ goals. The $80 hypothetical wagering confidence is another mark of their conviction, as is the aforementioned choice of this game (rather than Spurs hosting Huddersfield) that confirms this as a very confident prediction this week