AI at the Oscars: Swarm Intelligence Takes on the Experts

Sunday marks the 90th annual Academy Awards, and the third year that Unanimous AI will forecast the Oscar winners using its Swarm AI® technology. In previous years, groups of regular movie fans using have not only amplified their own individual performance, but by thinking together as a Swarm AI system, they were able to exceed the accuracy on display from experts like Variety and the New York Times.

Turning groups of average people into super-experts is one of the goals of the Swarm AI system, which is based on Swarm Intelligence, a process that evolved to help simple organisms solve complex problems. “Complex” is certainly the right word to describe the challenge presented by the Academy on Oscar night, since the awards are a subjective prize. Aspiring forecasters must not only consider the quality of the films and performances, but also the potential mindset and preferences of hundreds of Academy voters. To do well requires a nuanced understanding of human emotions in ways that predicting the winner of the Super Bowl does not.

To that end, researchers at Unanimous AI formed a swarm of 40 movie fans who had not only seen many of the nominees, but would actively be tracking the various races and would be watching the Oscars on Sunday. Each member of the group was asked to record their individual predictions so that prizes could be awarded to the person who brought the most wisdom and intuition. Then, combining their collective intelligence in real-time with AI algorithms, Unanimous was able to elicit from the group an optimized set of forecasts for the 90th Academy Awards. This is what it looks like when 40 or so movie fans use Swarm AI technology to converge on a prediction:

As you can see, the Oscar Swarm ultimately selected THE SHAPE OF WATER as the Best Picture winner over 3 BILLBOARDS OUTSIDE EBBING MISSOURI. This replay shows the final swarm in an iterative process of elimination that originally included all of the nominees for the ultimate honor. The methodology used to pare down the selection echoes the process used by Unanimous to famously predict the Kentucky Derby Superfecta and offers researchers more insight than simply predicting which film is most likely to win. In the case of the Best Picture category, all but the aforementioned two films were quickly dismissed, but the final pairing seemed to present a difficult choice for the Oscar Swarm. In other words, this group of movie fans showed high confidence that either THE SHAPE OF WATER or 3 BILLBOARDS would take home Best Picture, but much less confidence in choosing between them.

In contrast, the Oscar Swarm had no such hesitations in forecasting the winner of Best Actor. Gary Oldman has already won several major awards for his depiction of Winston Churchill in DARKEST HOUR, and the AI sees very little reason for that to change on Sunday night.

A full rundown of the AI’s predictions for the Oscars is available below. Note that while all nominees were considered by the Oscar Swarm, only those who received some meaningful support during the swarm session are listed in on the chart below. So, while there are five nominees for Best Original Screenplay, for example, the insight offered by the AI suggests only three choices, GET OUT, LADYBIRD, and 3 BILLBOARDS, would receive meaningful consideration by the Academy. 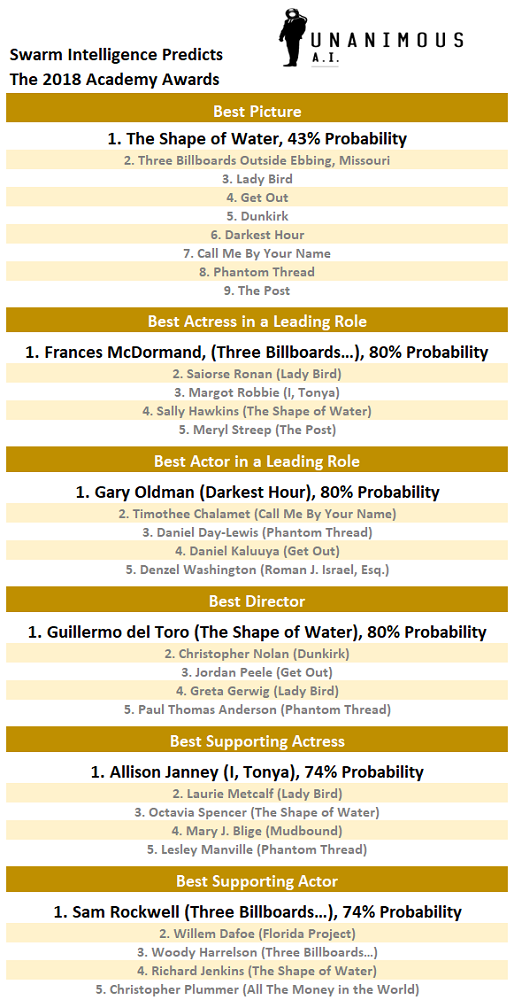 Once again, Unanimous AI Correctly Forecast the Winner of the World Series Before the Season Started
Unanimous AI is well known for taking on challenges from journalists across a wide range of…