AI Picks for the Golden Globes

Researchers here at Unanimous AI are rightly enamored by Predictive Intelligence. There is no cleaner way to test the ability of their Swarm AI® platform to amplify the intelligence of groups, than to challenge them to predict the outcome of future events. Weekly NFL games and even more frequent matchups in the NBA, EPL and more provide an excellent test-bed for season-long studies. But for all of the oft-discussed difficulty in predicting which team will win, other cultural events like the Golden Globes might be even more demanding to forecast.

Predicting the outcome of an NFL game primarily involves assessing the relatives strengths and weaknesses of team against intangibles like the weather and the location. Sometimes, as in Week 17 of the NFL season, questions of motivation and incentive arise, but for the most part, both teams want to win equally and the trick is to identify which is likely to perform better on a given day. In contrast, Sunday’s Golden Globe awards, which Unanimous researchers recently used their Swarm AI platform to forecast, challenges the AI to not only assess the relative quality of multiple movies under consideration in each category, but also to project how the inscrutable 93 person Hollywood Foreign Press Association will weigh those same films. Moreover, as the first major awards show of the season, the amount of information available is lower than it will be during Oscar season. Predicting subjective outcomes like the Golden Globes is therefore not only a question of the Swarm AI system’s ability to process limited information accurately, but also its ability to empathize with another group and offer predictive insight into its behavior.

Despite these challenges, groups of regular people have performed remarkably well in these cultural predictions. Just last month, a swarm-based intelligence correctly predicted TIME’s Person of the Year for the 2nd year in a row. Last year, a group of movie fans beat the Hollywood insiders at the Oscars, once again turning amateurs into “super-experts” on the biggest night in show business. One potential explanation for these successes is that while Swarm Intelligence evolved to help simple organisms solve complex problems, in bringing this ability to humans, research has shown that human swarms display incredible emotional intelligence, a key factor in predicting subjective outcomes.

So, what would predictive insights would Unanimous researchers uncover in advance of this year’s Golden Globes? The chart below captures the predictions registered by the Swarm AI system for all of the major categories at Sunday’s awards, which will once again be compared with the experts at the New York Times, Variety and others. But, beyond just the winners, Unanimous researchers used their platform to look deep into each contenders’ chances. 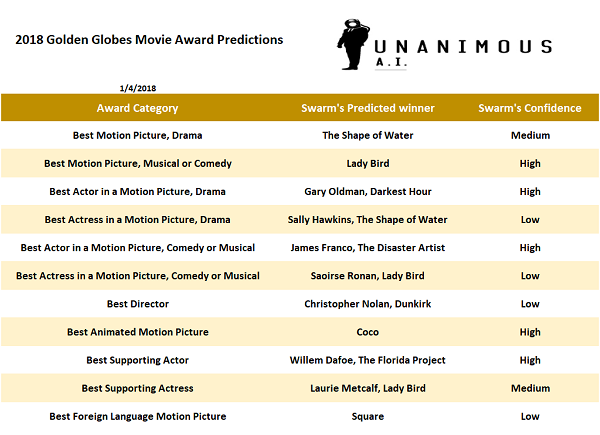 To see how this insight was produced, it’s helpful to examine the methodology that was used to rank and sort the nominees. Following the same procedure used to nail the 541-1 Kentucky Derby Superfecta, Unanimous tasked its Swarm AI technology to repeatedly identify the least likely contender to win each category. This forces the AI to reckon with every nominee at some point, and allows Unanimous to shed light onto how the group arrived at its insight. The full ranking for every category will be provided below, but first consider this replay of the question of which Director would be least likely to win on Sunday.

As you can see, this question demanded that the Swarm AI system pit the most recent films from some true Hollywood titans against one another. In this instance, the odd man out is Martin McDonagh, whose film Three Billboards Outside Ebbing, MIssouri has been widely praised, but was not considered a serious contender by the group. With the field winnowed to Spielberg, Del Toro, McDonagh, Nolan and Scott, the AI’s decisions would be much more difficult to make, and the virtual negotiations would be come increasingly. Eventually, the Swarm AI system pared the list down to Christopher Nolan ( Dunkirk ) and Guillermo Del Toro (The Shape of Water), followed by, in order Steven Spielberg and Ridley Scott. To decide between those final two directors, Unanimous flipped the question to ask, which contender is most likely to win the Golden Globe, and how confident is the AI in that prediction?

The insight here is not just that the group converged on Christopher Nolan with Low Confidence, but that its journey to that output was demonstrably taut. Tracking the motion of the puck and the movement of the magnets suggests initial support for both directors at both levels of confidence. Looking further into this replay via the Swarm Insight® portal and its Faction Analysis makes clear how these factions formed, and how they shifted over team as the group collaborated on its optimized response.

The Faction Size vs Time chart reinforces just how divided the group was on the question of Best Director between Nolan and Del Toro. So it may come as no surprise that while the group tabbed Nolan as Best Director for Dunkirk, Del Toro’s The Shape of Water edged out the WWII epic for Best Motion Picture, Drama.

The full set of Golden Globe insights produced by Unanimous AI is captured in the chart below. You can click anywhere on the chart to see replays of every result. And, if you happen to use this research to win your office pool…please drop Unanimous AI a note! 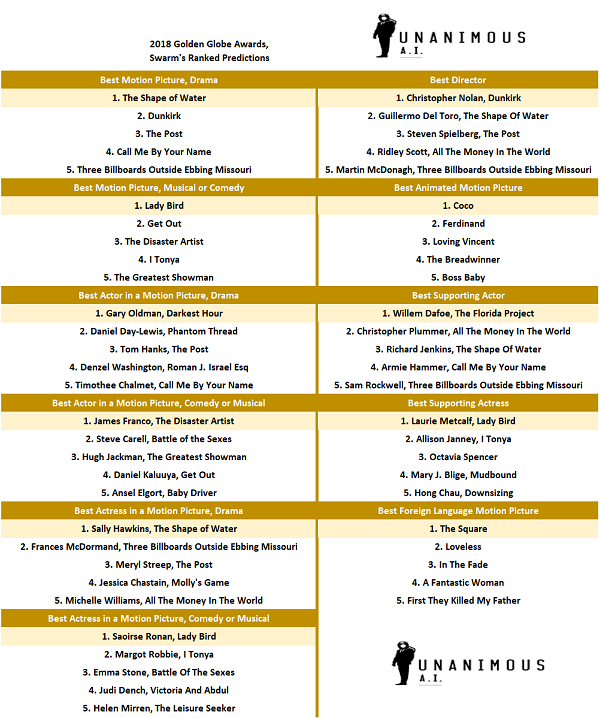