After years of criticism from fans, managers, and players alike, Major League Baseball finally overhauled its playoff home field advantage rules in 2017. Instead of the weird previous system, where the All Star Game in July decided which league held the advantage in the series, in 2017 and going forward, home field will be sensibly awarded to the team with the best record for the season.

That new wrinkle provides some final drama as we head into the last weekend of the MLB regular season, and gives participants in the final MLB Swarm of 2017 something to think about. Cleveland and Houston are vying for home field in the AL playoffs, and there’s still an outside chance the Tribe could overtake the Dodgers for home field in the World Series. Keeping that in mind, here’s how the swarm sees tonight’s games. 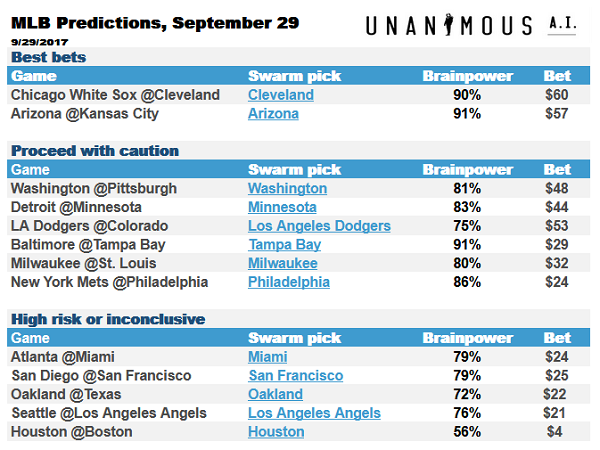 Perhaps the last big contested battle in MLB is between Houston and Cleveland for American League home field. The Tribe are currently a game up on the Astros, and look to have a competitive advantage in opponents as well. While Houston squares off with the division-leading Red Sox (who need another win to secure their own division), Cleveland draws a bad Chicago White Sox team. The swarm thinks the Houston game could go either way, but they really like Cleveland’s chances tonight.