With the wildcard teams set in each league, today the Major League Baseball playoffs begin in earnest. The MLB Swarm, fresh off correctly predicting both wildcard winners, convened today to take a look at the Division Series matchups. Then the swarm looked beyond the current round to see how things might play out in each league playoff series on the road to the 2017 World Series. 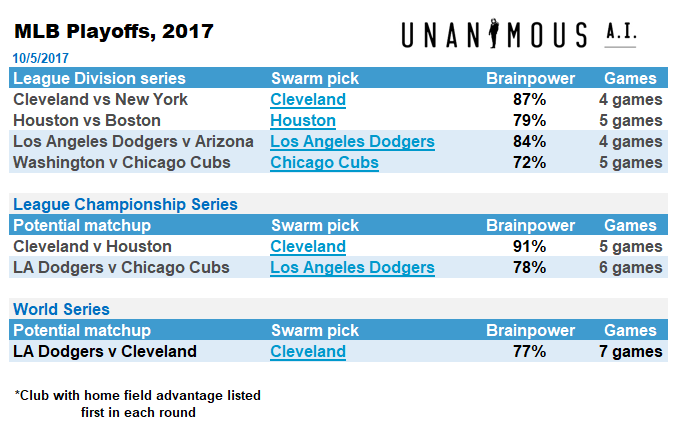 In the American League, the swarm gave the nod to Cleveland over the Yankees and the Astros over the Red Sox. For the Cleveland pick, it may be that the swarm favored the Tribe with a “hot hand” theory, given the Indians’ crazy 42-8 run over their final 50 games. By setting the expected length of the five-game series at just four, and with a very healthy betting confidence this looks like a strong endorsement.

On the National League side of things, the MLB Swarm has the Dodgers winning out over Arizona, and the Cubs beating the Nationals in a mild upset. The swarm picked the Dodgers with nearly the same set of confidence measures that they expressed in the Cleveland series in the American League. Unlike the AL pick, however, there’s no “hot hand” going for the Dodgers, who struggled through a memorable losing streak early in September. On paper, however, Los Angeles appears to have much deeper starting pitching, and the swarm ranked this as the most important attribute for a potential World Series contender.

As the chart above shows, we asked the swarm to go ahead and predict the winners of the League Championship Series and even the World Series, based on their predictions here in the early rounds. With those picks, the MLB Swarm set a potential World Series matchup that pits the Dodgers against the Indians, the two teams with the best regular-season records in baseball. If things go the way our group predicts it, Tribe fans will have their first World Series to celebrate since 1948.

Want to know more about our Swarm AI technology? Check out our TED talk…