AI Picks for So You Think You Can Dance: Final Four

After a summer of dancing – and coaching, judging, and voting by the public – tonight the final four contestants on So You Think You Can Dance will receive their closing grades. Only one of the finalists will be named the Season 15 champion, and this year things look more wide open than in any previous season. After weeks of dancing well to rave reviews,  hip-hop dancer Slavik Pustovoytov closed things out with some uneven routines in the past few weeks, and pointed criticism from the judges. Meanwhile some surprising eliminations left him as the only male dancer in the final four, up against former dance partner Genessy Castillo as well as Hannahlei Cabanilla and Jensen Arnold.

After a performance-only show last week to allow each dancer to make his or her final case for the public and judges, tonight a winner will be announced. From the start of things, a weekly swarm of So You Think You Can Dance fans have been bullish on Slavik’s chances. After seeing the final performances, however, the view of this swarm has changed, and rather dramatically. Here’s how the swarm sees things now. 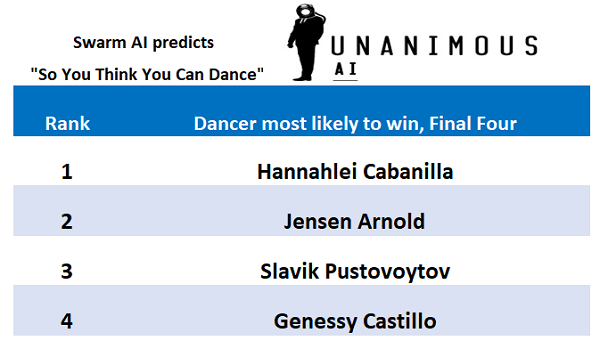 Two things are remarkable about this sudden turn in the swarm’s view of this competition. First, it’s clear that Slavik’s inconsistent performances over the last few weeks have been noticed – along with the very pointed, very critical negative opinions of the judges in that time. Equally impressive is the way that Hannahlei has emerged in the swarm’s view from being a middle-of-the-pack non-consideration to their marginal favorite. Jensen Arnold – who finishes a very close second in the swarm’s estimation – has looked like a contender for a few weeks.

As the replay above shows, the final choice of the swarm came down to Hannahlei and Jensen. The contentious decision depicted in that replay only tells part of the story, too. That was the second time the swarm considered that particular question. The first time they were asked, the group failed to find a consensus within the 60-second time limit. It’s easy to imagine a couple of group members defecting grudgingly from Jensen’s faction to arrive at  compromise decision the second time through, but without tremendous conviction.  Thus, Hannahlei is the swarm choice here…but only barely over Jensen, with former favorite Slavik a distant third.