AI Picks for So You Think You Can Dance: Round of 6

When FOX’s dance competition reality show “So You Think You Can Dance” settled on 10 finalists earlier in the month, an astute swarm of regular viewers were able to accurately separate and predict the pretenders from the contenders. In fact, going back to last week, the swarm has correctly called the elimination of three of the four contestants dismissed from the show.

On tonight’s episode, SYTYCD goes from six dancers to a final four. Would the swarm of fans of the show continue to show support for hip-hop dancer Slavik Pustovoytov? Or would they reconsider on dancers such as Jensen Arnold and Jay Jay Dixonbey, both of whom seemed to have strong performances last week? Here’s how the swarm ranks the chances of the final six as far as winning the competition. 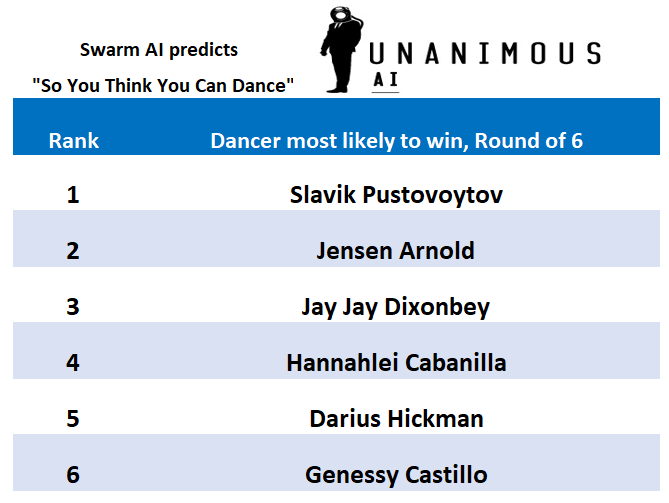 As you can see, the swarm remains strongly in Slavik’s corner, but it’s interesting to see that both Jensen and Jay Jay have moved up the ladder. Both could be contenders as the show enters the late stages. Also noticeable? Genessy and Darius have both tumbled to the bottom of the group, following their placement in the bottom four in last week’s episode. Does the swarm think that could be a harbinger of things to come?

Indeed, if the swarm had stock in either of these dancers, it might be time to sell. And even with Darius being the group’s close for elimination tonight, Genessy shouldn’t rest easy; by this prediction tonight could well mean her swan song as well.