TIME Magazine’s Person of the Year is will be announced tomorrow, December 11th. This annual tradition identifies the person – or people – who, in the opinion of TIME, had the most influence over the past 12 months. TIME affords itself the leeway to measure “influence” in any way it so chooses, making the Person of the Year award notoriously difficult to forecast. In fact, TIME’s own massive readers’ poll comparing the 50 most likely winners has consistently failed to predict where the magazine will end up. Last year, the readers incorrectly guessed that Saudi prince Mohammed bin Salman would take home the prize, and the year before that, Indian Prime Minister Narendra Modi. While the announcement is still a day away, the readers  have already gotten it wrong in 2018, as their choice of K-Pop sensation BTS failed to make Time’s Shortlist. 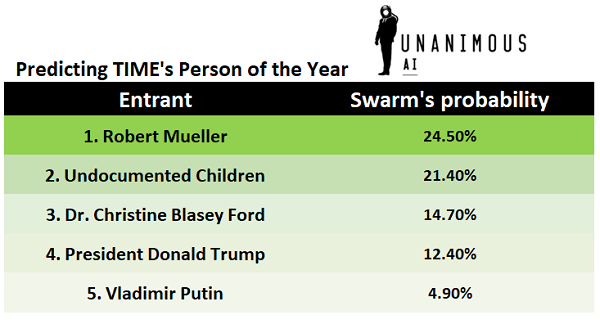 Unanimous AI produced this forecast by connecting those 40 Americans into a Swarm AI system, enabling them to combine their intelligence, intuition, experience and wisdom into a unified and optimized output. Their methodology employs the use of a comprehensive process which entails repeatedly asking the swarm to identify the likely winner of the TIME award amongst various potential fields. Each magnet you can see in the replay below represents a single participant in real-time system, converging upon the answer that best satisfies the group.

In the same session, the AI was also asked to evaluate each of the most likely candidates head to head with another. Below is the replay of the Swarm AI deciding between the two most likely winners, Robert Mueller and the undocumented children who have been separated from their parents at the borders. As you can see, the support for Robert Mueller in this instance is definitive, but not universal, and the AI ultimately registers its forecast with appropriate caution.

Approaching the question in this systematic manner allows Unanimous to peer into how the Swarm AI arrived at its forecast. In comparison to what amounted to a popularity contest in the readers’ poll, swarming produces deep insight into the way groups collaborate. The graph below reveals how, once the AI had deemed Robert Mueller to be the most likely, the AI also converged on the 25% likelihood that he would go on to win. 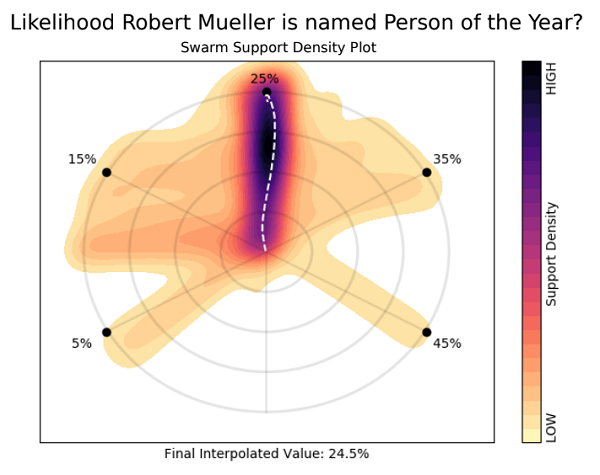 Finally, it should be pointed out that this forecast was not only produced before the shortlist was announced, but on the same day that Robert Mueller, the Special Counsel investigating the possibility of Russian interference into the 2016 election and beyond, revealed a set of important documents that captivated national attention. So, it is entirely possible that excitement about the Special Counsel’s investigation was a momentary uptick in Mueller’s chances to win  what is already certain is that, for the third year in a row, the Swarm AI system has outperformed the TIME reader’s poll in a high-profile forecasting challenge.

UPDATE: TIME awarded the 2018 Person of the Year to a group of journalists they deemed “the Guardians & the War on Truth.” This distinguished group of newspeople was not included on the initial list that TIME published for its readers poll, and thus was not taken into consideration by the Swarm AI system.

About Unanimous AI
Unanimous AI pioneers technologies that amplify the intelligence of business teams, combining the power of AI with the depth of human insight. Its Swarm AI technology is currently being used by Fortune 500 companies for a wide range of applications, from forecasting sales to optimizing marketing campaigns.  In 2018, Swarm AI was recognized as SXSW’s “Artificial Intelligence Innovation of the Year.” For more about Unanimous AI, see the TED talk, “Hope for Humans in an AI World” or visit http://unanimous.ai