Swarming EPL: AI Picks for the Weekend of March 17th

In the Premiership, March is a month that brings variable weather conditions, desperate play by teams looking to improve their prospects…and match postponements. With the Emirates’ FA Cup down to eight teams in the quarterfinals, it plays havoc with the regular Premiership fixtures this weekend and leaves just four regularly schedule matches.

However, we do also have those four quarterfinal Cup ties going on this weekend, and with a swarm scheduled it only made sense to see what the group thought of those Cup games as well as the remaining games on the schedule. Thus, we’ve got two sets of results from our weekly EPL Swarm today. 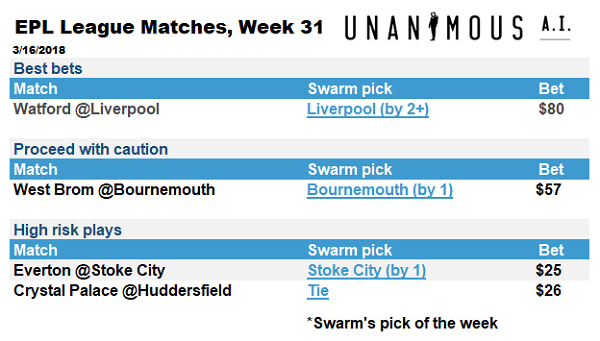 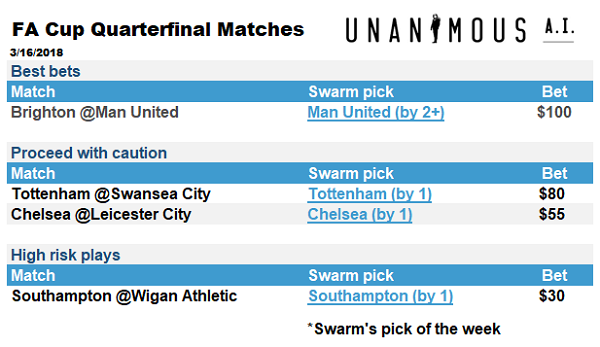 The first chart shows the swarm’s appraisal of league matches this weekend. Of all its picks in this game set, the group clearly had the most faith in Liverpool, who host Watford at Anfield this weekend. Although the swarm predicts a two-goal margin here and assigned an $80 hypothetical wager, there is a small amount of dissent to be found. When asked to rate all games for their pick of the week, the swarm chose this game second.

In the FA Cup matches, the swarm showed its highest confidence in any match this weekend in Man United, who host a plucky Brighton squad. As the replay below shows, the swarm is more confident in United to end Brighton’s Cup run than it is in the Liverpool match shown above. The swarm forms a consensus a little faster in the replay below, and there’s more unanimity there. The group also assigned the max hypothetical confidence in this match, making it their pick of the week.