With the MLB non-waiver trading deadline at 4pm eastern today, the start of the final kick to the finish line of the marathon 162-game schedule begins. While it might seem like this section of the season – with its separation of contenders and pretenders — makes things a bit easier on the weekly baseball swarm for predicting games, that’s not always the case. This is also the time of year when young players look to assert themselves by taking on established winning teams and performing well with renewed energy. As an example, the hapless Orioles have played their best baseball of the season after dealing their stars, Manny Machado and Zach Britton. Here’s how the swarm sees today’s games playing out. 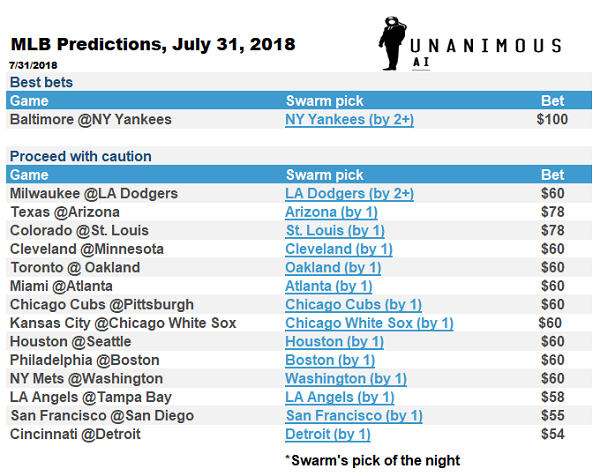 Although the aforementioned Orioles have been playing better in the last week or two, for tonight’s matchup they face the formidable New York Yankees in a game that matches two teams nearly 36 games apart in the standings. This contest is also the only real clear-cut high confidence game the swarm predicted for today, with rosters being in such tremendous flux due to players coming and going at the deadline.

It’s uncommon for a baseball swarm to find as much consensus in a prediction as we see in the replay above, especially one at high confidence. It isn’t until the puck moves over the Yankee pick that a few steering magnets swing around to keep the swarm from taking the puck off the field of view. What makes the confidence and strong consensus here even more remarkable is that the chart above demonstrates that today’s swarm was torn on every other pick, showing mixtures of confidence and doubt almost in equal measures. There’s no equivocation in this prediction whatsoever, though, and the swarm easily chose this matchup as their pick of the night tonight. WSJ Praises Unanimous AI for Forecast of 2020 Presidential Election, Correctly Predicting all Eleven Battleground States
The Polls Got it Wrong.  Unanimous AI was Perfect!   As reported this week in…
Sportspicker AI Defies Odds, Posts Even Better Record Since Return of Major U.S. Sports
Here's How the AI System Used the Covid-19 Hiatus to Get Even Smarter About Sports…