AI Picks for the NFL: Week 1

The National Football League returns to action this week with a full slate of games, and an intriguing season set to get underway. Will an old guard of quarterbacks (Brady, Brees, Roethlisberger and Rodgers) be able to take their teams to the playoffs again this year? Or is the NFL turning the page, with upstarts like the Rams and Jaguars ready to build off successful campaigns last year? With a full Sunday of football coming up, Unanimous AI convened its first NFL swarm of the year this weeks.

The start of any sports season means that swarm participants lack some of the data they’ll be able to call on later in the year. Some of the data is old – namely, working from last year’s performance for teams. Other pieces of information the participants work with is subject to variables and interpretation, like performance during exhibition games and glowing reports from training camps. With that in mind, it was understandable that the swarm was very cautious this first week out, even with picks of games made straight up. 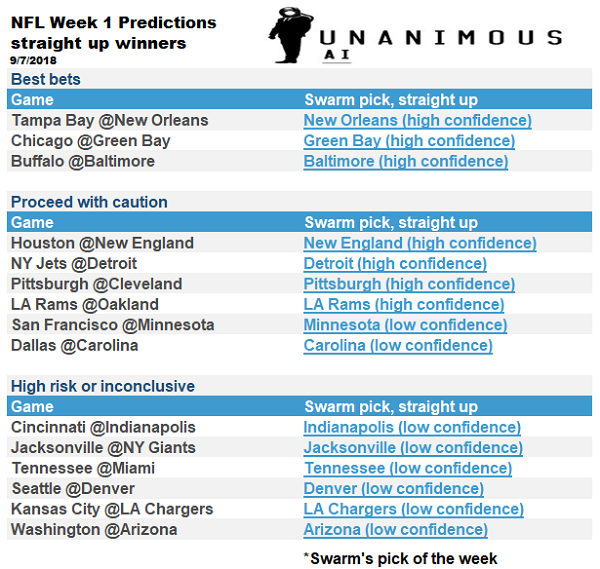 Although pickings were slim for higher confidence predictions, one game the swarm did like as a straight up prediction was the New Orleans Saints hosting Tampa Bay on Sunday. As the replay below demonstrates, this was a high confidence forecast with a great deal of cohesion amongst the swarm participants. It’s not the sexiest pick ever, but for anyone looking for a game to single out in a parlay (or suicide pool players) this might be a worthy matchup to investigate.

The swarm also considered each game against the spread. Point spreads are set and move according to the behavior of gamblers, and as such act as a gigantic crowdsourcing platform. Trying to find some daylight in these massively crowdsourced matchups is tricky at best, and for the first week of the NFL season caution was the name of the game. 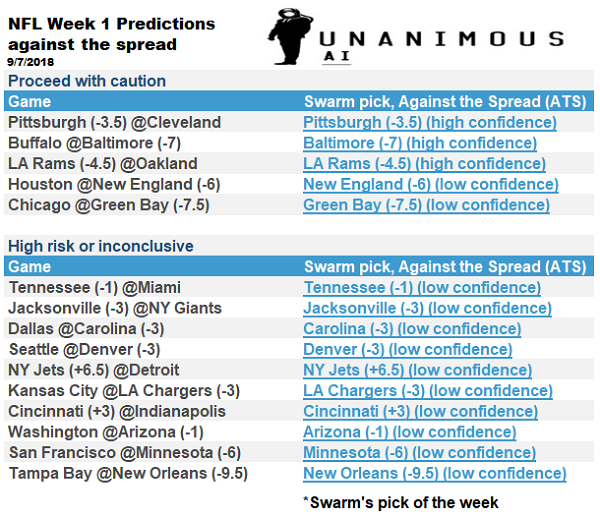 As the chart above shows, there’s no matchup the swarm feels comfortable with calling a high confidence prediction. Still, if you must, the game between inter-divisional rivals Pittsburgh and Cleveland might be about as confident as the swarm got this week. Even so, the replay below shows that there’s meaningful dissent in this swarm selection enough for this to be a prediction with great caution attached to it.

We’ll be back next week with our Week One results and predictions for the second weekend in the season. In the meantime, if you’re an NFL fan and want to help us predict these games, please click the link below!