The final quarter of the Major League Baseball season can be an interesting time for rookies. For most young players new to the league, this is the most baseball they’ve played in a single season in their lives and the grind can begin to wear on them. But some rookies rise to the occasion in the late season crucible; for them, at the end of the season they’re almost not rookies anymore. They’ve had enough experience going back to April to now feel comfortable in the home stretch. Teams powered by those rookies have an advantage in this part of the season, and the Baseball Swarm has to be aware when making its predictions. 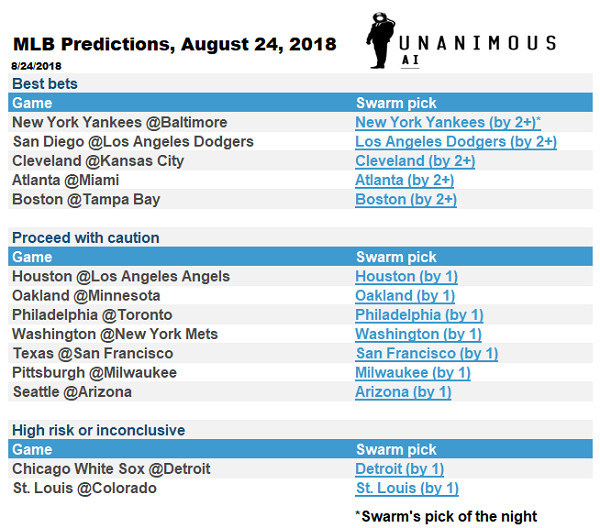 The swarm once again made the Yankees – who play the last-place Orioles – their pick of the night. And the Yankees are certainly driven right now by the play of their two rookie infielders, Miguel Andujar and Gleyber Torres. Another rookie-fueled team finished just behind the Yankees in the swarm’s reckoning, and that’s the Atlanta Braves. The Braves, powered by rookie of the year candidate Ronald Acuña Jr., have played great baseball in August. In so doing they’ve taken control of the National League East for now.

Tonight the Braves have the reliable Mike Foltynewicz pitching for them, and the replay shows that the swarm loves their chances. This is also an interesting replay to watch. The puck in confident predictions sometimes makes a bee-line at a straight diagonal for that high confidence, two-runs-plus win. Here though, it makes more of a “J” shape, moving all the way to the left, and then swinging up. It’s as if the swarm was very decided on Atlanta winning this game, and then made the secondary consideration that they’d win by a couple of runs. This is a game where we’d interpret that “J” swoop to mean that the swarm has high conviction in a Braves win, but perhaps has some wavering on the ease of that victory.

Once again, Unanimous AI Correctly Forecast the Winner of the World Series Before the Season Started
Unanimous AI is well known for taking on challenges from journalists across a wide range of…