Baseball is a game of numbers: hitters who hit .300, knock 30 home runs, or drive in 100 runners exist in rarefied air. Pitchers have their own milestone number stats, and perhaps none is more storied than hitting the 20-win milestone in a single season. Though the perception of “pitcher wins” as a valuable statistic has declined in the modern era of analytics, it remains an achievement worth saluting. Tonight, among other games, we’ve got a pitcher vying to be the first in MLB to win 20 in 2018. Here’s how the Baseball Swarm picked tonight’s contests. 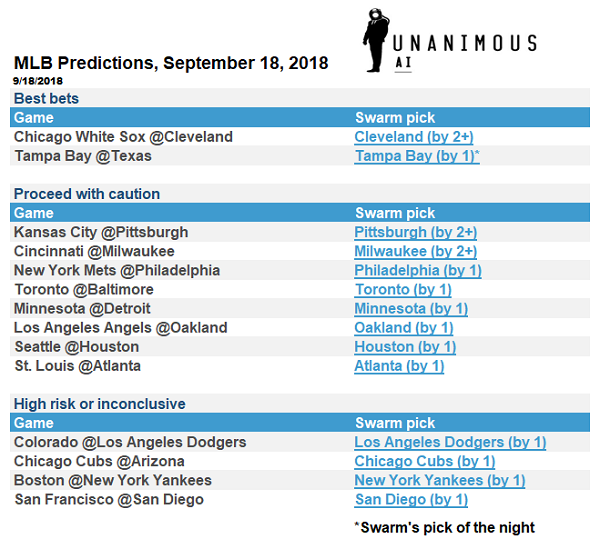 The Tampa Bay Rays aren’t going to the playoffs this year. But through the season, the Rays have played excellent baseball and manager Kevin Cash has handled their young pitchers well. This nurturing has brought a new superstar to maturity in starting pitcher Blake Snell. Snell is having a season for the ages, perhaps one of the top pitching seasons for a starter in  over a decade. He’s going for his 20th with tonight in a game in Arlington against the Texas Rangers and the swarm likes the Rays’ chances.

This is a really interesting prediction to sort through. As the replay above shows, the swarm only predicted Tampa to win by 1 run. That typically signifies overwhelmingly a prediction that wouldn’t be slotted into the high confidence tier. But there’s a lot going on in that replay. Notice how all the magnets quickly end up pulling to the left side of the hex, and how for a while there’s a tug of war between a 2-run and 1-run prediction. That’s much stronger than the vast majority of 1-run confidence picks. But adding to that confidence are two other factors: the swarm assigned a high hypothetical betting confidence on this game, and also the swarm considered the Rays game alongside the Cleveland game as a pick of the night. With that choice to make, the swarm picked Tampa and Snell, and those extra confidence signifiers kicked this game into the top-most, high confidence tier.