As the Major League Baseball schedule begins its post-Labor Day sprint to the post-season, teams in the playoff chase may have wildly differing agendas. For instance, Cleveland is all but assured of a playoff spot in the division series, given their huge lead in the Central; they may coast on into October. Further west, Seattle is in a fight for their playoff lives. Every game the Mariners play from here on out will have the feeling of a playoff game, as they can ill afford any losses in chasing down the Athletics for the final wildcard. Those teams are among the 30 in action tonight, and here is how the weekly Baseball Swarm predicted them: 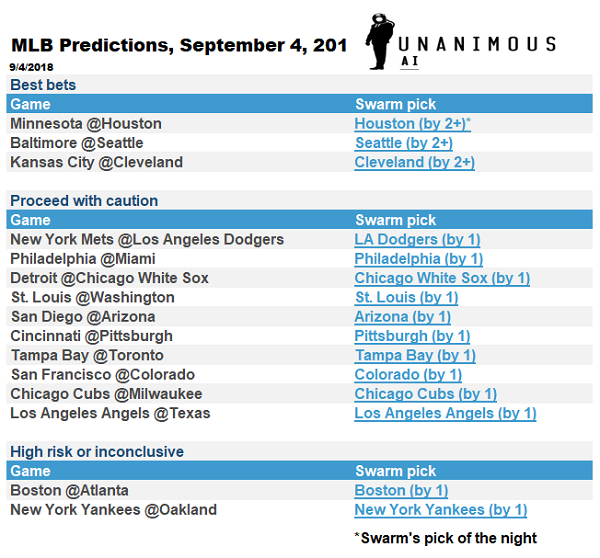 A series against the lowly Baltimore Orioles is exactly what the doctor ordered for Seattle to start the week. If the Mariners are to make up any ground, they’ll have to beat the teams they’re supposed to beat…and Baltimore certainly fits that bill. The swarm likes the M’s chances this evening.

Although the group made Houston their pick of the night, this matchup isn’t too far behind in confidence level. It should be noted that there are a couple of magnets doggedly pulling for a Baltimore win in this replay, but the overwhelming consensus of the group combines to make for a strong level of cohesion in taking the Mariners at high confidence. In fact, this game was the one just narrowly edged out by the swarm when considering a pick of the night, and should be thought of in similar terms.