AI Picks for the NFL: Week 2

The first week of the NFL season is in the books, having provided more than a fair share of surprises: FitzMagic made an encore appearance for the Bucs, the Rams looked scary good in Oakland while Buffalo looked scary bad against Baltimore. Week One also offered up reruns of some storylines that football fans know very well, as the Patriots won (ho hum) and Aaron Rodgers got up off the trainer’s gurney and brought the Packers all the way back against the Bears.

The first week of the Unanimous AI NFL predictions offered similar thrills and spills. The swarm went 9-7 overall straight up, and finished with a strong 10-5-1 record against the spread. With each passing week, the group of football fans get new “data”—namely the outcomes of previous games. It’s up to them to interpret  this “input” (such as Tampa’s surprising offensive outburst or whether there’s any pulse in Buffalo or Detroit) and then combine that knowledge with a group as a Swarm Intelligence to predict the game outcomes. Here’s how they see the weekend’s games against the spread. 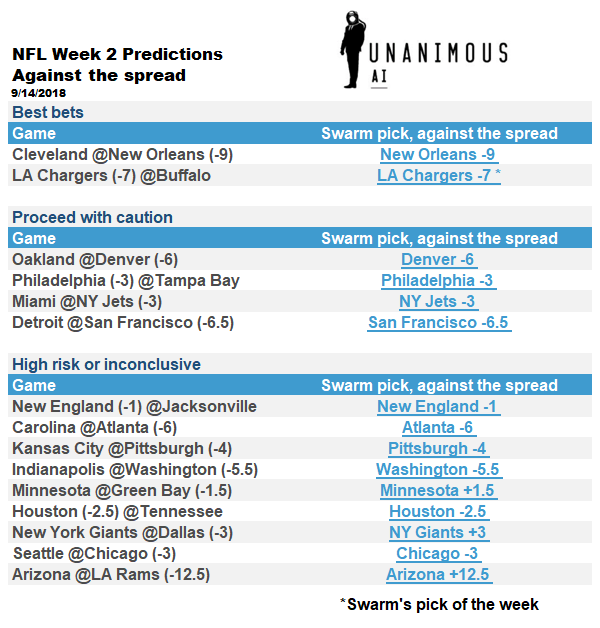 Last week, the Saints to win straight up was one of the most confident predictions the swarm made. No one – not the swarm, not NFL analysts, and certainly not Vegas – envisioned Ryan Fitzpatrick turning back the clock and destroying what was supposed to be a refurbished New Orleans defensive unit. The Saints get a second straight home game to start the season, and Sunday that’s against the Cleveland Browns. As the replay below shows, the swarm thinks the Who Dats will cover the 9 points and win this one. There’s definitely some dissension on this ATS prediction that we should note, and that’s readily apparent. Still, a high confidence measure in a matchup against the spread at this early stage of the season against a spread number stood out as a point of separation from all other predictions.

The swarm also loved the Chargers (or perhaps were dismissive of Buffalo) to the extent that they made the Bolts their ATS Pick of the Week—just barely over the Saints game. Meanwhile, we can use our responses to also gauge how the swarm feels about these games straight up, too. And those predictions look a little bit different. 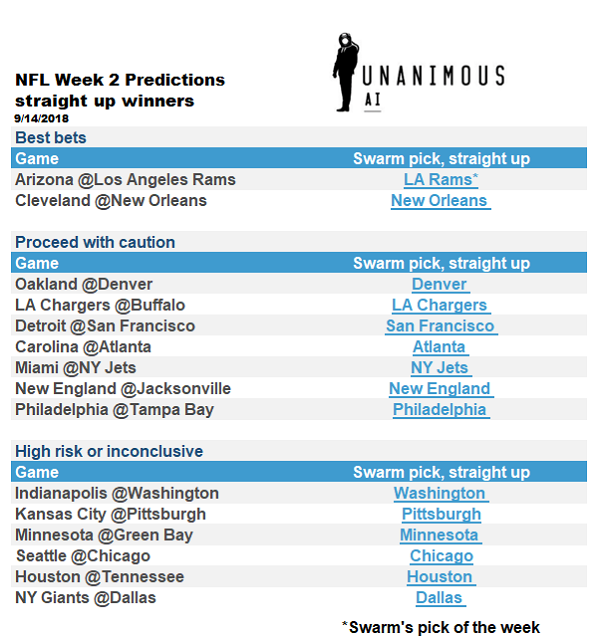 One of the scariest things for point spread players to see this early in the season is a huge double digit spread in a game. As the ATS chart shows, that scared the group away from picking the Rams to cover two touchdowns at home against division rival Arizona. Take away that point spread, however, and now the swarm need only pick the team that took apart the Raiders in the second half on Monday night at home against a Cardinals team that barely showed up against the ‘Skins in week one. When asked to consider this matchup straight up, the swarm’s answer changed dramatically.

Kick out the point spread, and the swarm takes this game as the straight-up pick of the week, and the replay above shows why. There are a few magnets that initially start at low confidence on the Rams side of the hex, and even a few non-believers who pull for Arizona. But the swarm participants predicting the Rams to win with high confidence have tons of conviction and that quickly makes this a cohesive, high confidence forecast. The swarm then added to that conviction by choosing the Rams to win straight up even above New Orleans in their respective high spread matchup.