With just four games remaining in the NFL schedule, a number of teams have everything to play for. 19 of the 32 teams in the league have 6-6 records or better. Teams at the bottom end of that spectrum are fighting to get into the postseason, while teams at the top fight for all-important first-round playoff byes and home field advantage.

The weekly NFL Swarm is fresh off an 11-5 week, as part of a recent hot run through the November schedule. According to swarm participants, they found this week to be particularly challenging, with a number of closely contested rivalry games featuring prominently on the weekend’s slate of contests. 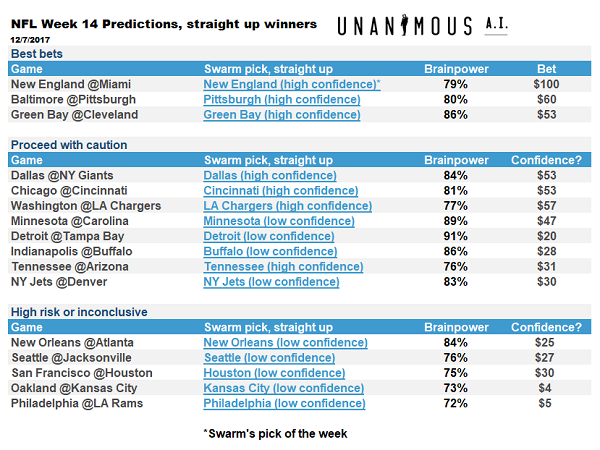 The defending Super Bowl Champion New England Patriots sure did look like a pedestrian team when they struggled to a 2-2 record through their first four games. Perhaps the Belichick magic had worn off, or Father Time was finally catching up with Tom Brady? Maybe not any of those things, actually. The Pats have won eight straight since then and are in the fight for one of those precious first-round playoff byes.

The swarm made New England their pick of the week straight up for their game against division-rival Miami. This is one of those situations where Brain Power doesn’t tell us all we need. Instead, looking at the replay above you can see that the middling Brain Power is a function of the swarm being too overzealous on making an enthusiastic New England prediction, with the swarm being completely unanimous in team choice. The maximum hypothetical wager and swarm selection of this contest makes it a strong Pick of the Week choice.

For games against the spread, the swarm has a few recommendations for these high-risk plays. Notice that the New England game with it’s 11.5-point spread moves way down the list, and it is Green Bay visiting Cleveland that looks like the most confident play. Even so, double down on caution: picking against the spread carries far more risk than straight up predictions. 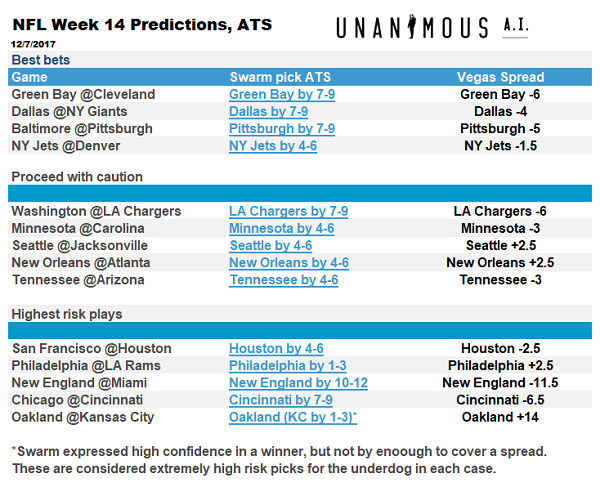