Each week, a swarm of Premier League fans gathers on the Unanimous Swarm AI platform to predict the outcomes of matches. While the group have seen some ups and downs of late, their high confidence predictions have generally been strong and helped contribute to a stellar week last week.

This is Derby Week in the Premiership, and along with those often prediction-defying rivalry games there are some very intriguing matches taking place all across the league. The swarm considered each game and made these predictions. 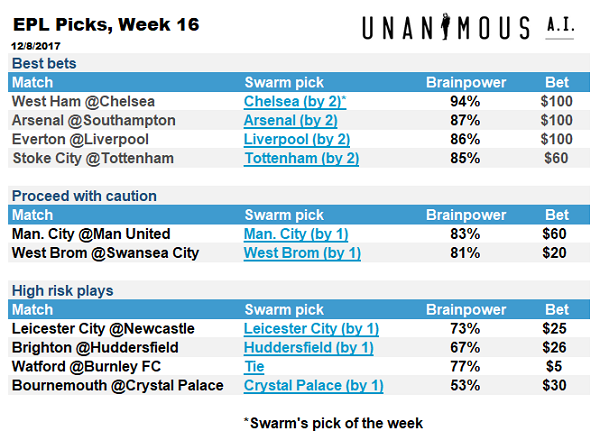 Chelsea hosting West Ham at Stamford Bridge is the unsurprising pick of the week. The swarm assigned a huge Brain Power on this, indicating almost universal agreement here, backed with a maximum hypothetical wager. With that said, though, we know the two matches most Premier League fans will be following this weekend. Let’s talk Derbies, starting with the Merseyside tilt between Everton and Liverpool at Anfield.

Everton had an utterly disastrous start to the season, only getting clear of the relegation zone in late October. Since then, the Toffees have been playing well. Unfortunately, their crosstown rivals have also played well across the same span. As the replay above shows, the swarm loves Liverpool in this matchup with high confidence across all measurements, including going nearly to the max on the hypothetical wager. That game selected, the titanic match of the weekend might be the one to the north in Manchester.

This match has the potential to be quite a donnybrook. City will look to draw well clear of their closest Premier League rivals, while United will try to seize the home half of the Manchester Derby to reel in Pep Guaradiola’s juggernaut of a team. Although the swarm has typically expressed strong confidence in City throughout the season, for this match they’ve tempered that enthusiasm a bit. The swarm’s wavering confidence as expressed by a low Brain Power and single-goal confidence offset even a moderately confident hypothetical bet. This seems like it could be a contest that will be far more enjoyable to watch than wager on.