AI Picks for So You Think You Can Dance: Round of 8

Last week, a swarm of loyal viewers of FOX’s hit TV reality series So You Think You Can Dance got together to make their predictions of the eventual winner and also the two dancers who were most likely to be sent home. The swarm’s accuracy was uncanny, as later that day the two contestants that were picked as most likely to get the hook were indeed eliminated from the competition.

This week the swarm re-convened to consider the final eight dancers still alive on the show. The swarm first ranked the dancers based on the likelihood of each competitor to win. The swarm participants based this judgment not only on their own observations, but also on the judge’s comments in last week’s show and various social media postings about the competition. 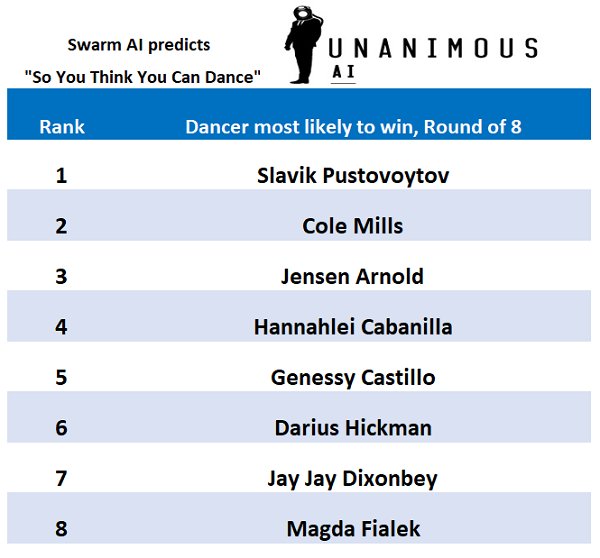 Although the swarm kept its top two ranked performers in place from last week, there was a ton of movement otherwise. Magdalena Fialek – last week’s third-ranked dancer – fell this week all the way to the bottom, while Jensen cruised into the third place spot. As far as the swarm is concerned, though, this competition is Slavik’s to lose at this point.

Once again, the dream ends again for two of the dancers on So You Think You Can Dance. Magda – who needed a judge’s save last week to stay in the competition – is the swarm’s pick for the contestant in the most trouble, but Jay Jay may not be far behind.