Swarming E3: AI Insight into the Future of Gaming

In the early summer each year, the Electronic Entertainment Expo (commonly known as E3) becomes the center of the video gaming universe. Everyone — from console manufacturers and publishers to media and fans — descend on the Los Angeles Convention Center where the industry showcases the hottest new upcoming games and related future tech. E3 2018 this year was a mix of presentations by the Big Three console manufacturers (Microsoft, Nintendo, and Sony) as well as the biggest publishers in the marketplace. Researchers at Unanimous AI convened a swarm of gamers who watched all the E3 coverage this week, asking them to provide insights into what they saw.

The Consoles: Welcome to the holding pattern

First up, the swarm was asked about the presentations of the three giant corporations who are industry leaders in console manufacturing. Microsoft, Nintendo, and Sony all had very different presentation styles, but what they showed offered our swarm of interested game-playing observers a window into the strengths and weaknesses of each respective console. 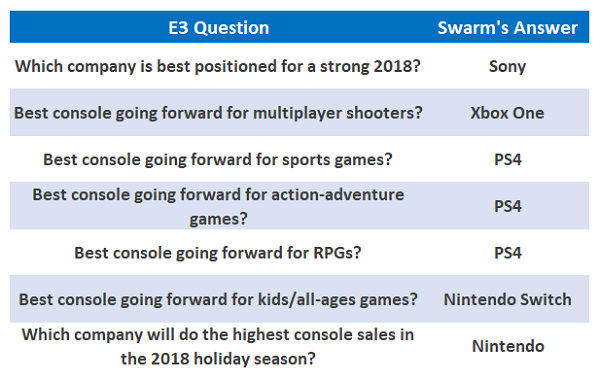 The swarm found Sony to be best positioned for 2018, but that largely seems related to sales of games and accessories for the console, as the swarm thinks the Switch will outsell the Playstation in North America during the holiday season. Why? Swarm participants mentioned that the PS4 was reaching a saturation sales point with gamers but for households looking at a second console, they might be looking to put a Switch under Christmas trees in December.

The high regard for the PS4 is still notable, however. The swarm was asked to rate each machine going forward into 2018 and beyond for its appeal to fans of various gaming genres. Unsurprisingly, Microsoft was rated the best for multiplayer online shooters (likely due to its current, brief exclusivity with Battlegrounds). Nintendo scored the highest marks for family-friendly, all-ages games (hello Pokemon and Mario). In every other category—roleplaying games, action-adventure games, and sports games– it was Sony and the PS4 that rated the highest.

The Publishers: More of This, Less of that

The console makers weren’t the only big corporations making a splash at E3. Four of the biggest worldwide game publishers also took the stage to present games in their respective stables that are slated for release in 2018, 2019, and beyond.

As the chart shows, the Gamer Swarm was asked what they were looking for from publishers – and what they wanted to see phased out. Surprisingly in this era of MOBAs and Royale-style multiplayer free-for-alls, the swarm indicated they want the industry to give them more single-player experiences. Less surprisingly, the swarm wants to see the practice of retail exclusives (“Buy Game X and Retailer Y, get an in-game doo-dad”) ended. Those retail add-ins typically end up as overpriced downloadable content, and consumers seem wary of that practice.

The swarm tabbed the French Publishing giant Ubisoft as the best purveyor of the single-player games it wants more of, in a nod to well-reviewed recent franchise entries in the Assassin’s Creed and Far Cry series, both of which do have a single-player focus. However, it was Bethesda’s overall presentation – full of reveals for upcoming new games in existing franchises and even a glimpse of a new IP – that the swarm judged as being the best overall.

The Games: Royale With Cheese 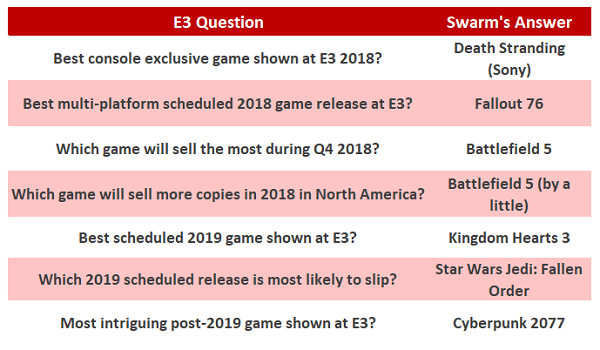 Perhaps the most interesting question response of the entire swarm session occurred when the group was asked to select the best upcoming 2018 game they saw, and the answer revealed an interesting dichotomy in the gaming community. The swarm split into a tug-of-war between Bethesda’s Fallout 76 and Ubisoft’s Assassin’s Creed Odyssey titles. Eventually (after re-asking the question when the swarm timer expired on the first query with the matter unresolved), the swarm landed on Fallout 76, a title that clearly appears to have polarized the gaming community. Given that the swarm had expressed previously that they wanted more single-player games, Bethesda’s inconsistent messaging on Fallout 76 (“It’s single player! With multiplayer!”) looks like quite the mountain for Bethesda’s marketing team to climb.

Qualitative impressions of games based on trailers is one thing, but the swarm was also asked to make a couple of quantitative assessments regarding which title shown at E3 would end up the biggest seller in the 2018 holiday season. As can be seen from the replay above, EA’s newest entrant into its Battlefield series – which will feature the wildly-popular “Royale” style gameplay mode that helped make PUBG and Fortnite the gaming phenomenon of the past year—was the winner here. In fact, the chart shows that EA should feel bullish about Battlefield 5. Unanimous AI put that game up against the 5,000-pound gorilla that wasn’t shown at this year’s E3 conference, Rockstar’s much-anticipated Red Dead Redemption sequel, and Battlefield still was the choice for the biggest seller this fall. The main reason? Rockstar’s failure to announce a PC version of Red Dead 2 looks to the swarm like money being left on the table.