Swarming the World Cup: AI Picks for the Most Watched Sporting Event in the World What happens when you bring together a group of football handicappers and wagering captains to predict World Cup outcomes? Unanimous AI, a US-based tech company did exactly that, joining experienced handicappers and syndicate captains from around the world in real-time to form a “Swarm Intelligence” that could predict outcomes for the upcoming World Cup. And while there was certainly plenty of spirited debate and argument on the finer points, what we discovered was that this group of 30 expert analysts found a great deal of common ground and consensus in many of their predictions.

The Unanimous AI Swarm platform allows groups of people to join up in virtual online rooms to answer focused questions on particular subject matter. These questions asked of the emergent “hive mind” of participants may be used to capture general attitude and sentiment, but also have shown great application as a predictive tool. In 2016, a group of horse racing fans won the 541 to 1 Kentucky Derby Superfecta, turning $20 into $11,000 when the top four runners finished in the exact order the Swarm predicted. Earlier this year, a group of movie fans used the platform to create a Swarm Intelligence that accurately forecast 15 of 16 major Oscar categories, and a group of Premier League fans carried off a perfect 10-0 record on matchday 30 in March, turning $1 into over $1,200 as the centerpiece of a 44-14 predictions run through the heart of the Premiership season.

For the World Cup, Colossus and Unanimous joined forces to create a group of 30 experts comprised of football handicappers and observers from the UK, US, and even New Zealand. The swarm of 30 experts found that not all groups in the first stage of the World Cup are created equally. Germany, Brazil, Spain, France, Argentina and Uruguay were rated as near locks to finish atop their respective groups. Not far behind in the Swarm Intelligence’s reckoning is Belgium, although in the final group, predicted winner Colombia found the least amount of cohesive consensus on their finish. 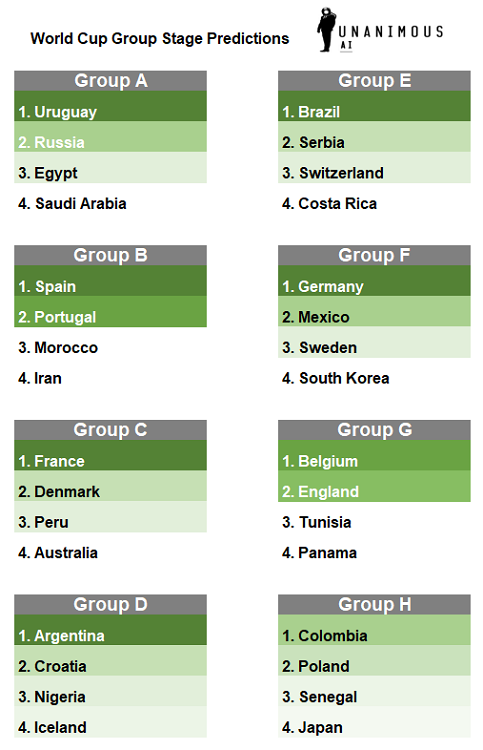 There was less conviction in considering some of the group runners-up, teams that will also proceed to the knockout stage. The swarm of experts sees Portugal and England breezing through to the tournament section of the World Cup in their groups’ respective second spots. They also predicted Mexico and host-country Russia to get through with only slightly less certainty. After that, however, we find much thinner areas of group cohesion and conviction, with the swarm giving a marginal edge in probability to Denmark in Group C, Croatia in Group D, Serbia in Group E and Poland in Group H.

When the Swarm’s group predictions were placed into hypothetical potential matchups, there were some exciting potential games that look to be utter coin-flips for wagering purposes, as well as some very obvious bankers. For instance, if predicted Group B runner-up Portugal face Uruguay – the likely Group A winner – the swarm favors the Portuguese in the match by the smallest of margins. Similarly, should England and Colombia face off, the swarm gives a very slight nod to the Three Lions to prevail.

Otherwise, the predicted group winners should have an easier go of potential first round knockout matches. For instance, Germany would likely face Serbia or Switzerland in their first round match that tilts heavily toward the defending champions. Brazil looks likely to draw a familiar foe in Mexico, and the swarm forecasts that match going to the South American footballing juggernaut.

With so many experts from around the world assembled as part of a swarm, we had to get the hive mind’s forecast on which team is most likely to win it all this summer. Perhaps unsurprisingly, Germany and Brazil were the favorites, and if both teams win their respective groups their bracket assignments put them on a collision course to meet in the finals. Perhaps based on the competition on the sides of the bracket, the swarm gives the slight nod to the Cup defenders to repeat in 2018, although should that finals matchup take place Brazil will be looking to avenge the 7-1 thrashing from the teams’ 2014 meeting.  Spain and France tuck in behind those to sides as almost equally probable third-likely contenders.  Argentina and Belgium follow on as dark-horse potential upsetters, but then the swarm sees a large drop-off to the remaining pool of teams who all appear to be longshots at best. 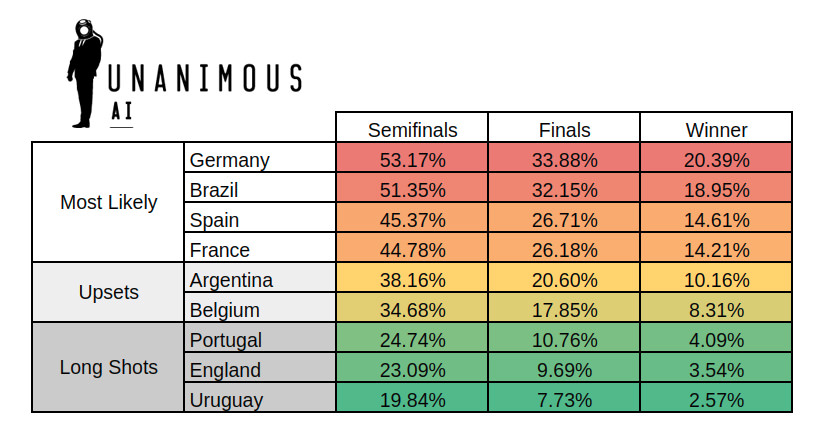