Though parts of the country are still dealing with Old Man Winter, March Madness seemingly waits for no one. Starting tomorrow, expect to see the onset of bizarre, weekend-only “illnesses” that cause millions to miss work or school, seeking out every obscure channel where a game might be airing. Another time-honored part of this national sports ritual is filling out brackets, and it’s typical for everyone from hardcore hoop-heads to casual fans to take a stab at online or office pools.

There’s typically no shortage of guidance for would-be bracketologists either. Every sports network puts up their own expert predictions of course, but they’re typically joined by punditry sites who try to apply statistical analysis and game metrics in pursuit of winning brackets. This week, Unanimous AI used its own Swarm AI Technology to create expert-level predictions from a group of regular college basketball fans. Last year, the Unanimous predictions went 28-4 in the first round of NCAA games, before the chaos of subsequent rounds sent the bracket into a nosedive. With that said, the swarm has been hot of late, correctly predicting 15 of 16 Oscar winners this month, as well as posting a perfect 10-0 record this week in Premier League soccer matches. That not only demonstrates some stunning accuracy, it also shows that Swarm can amplify the intelligence of even casual – but interested – fans to expert levels. Without further ado, then, here’s the Unanimous AI 2018 March Madness Bracket. 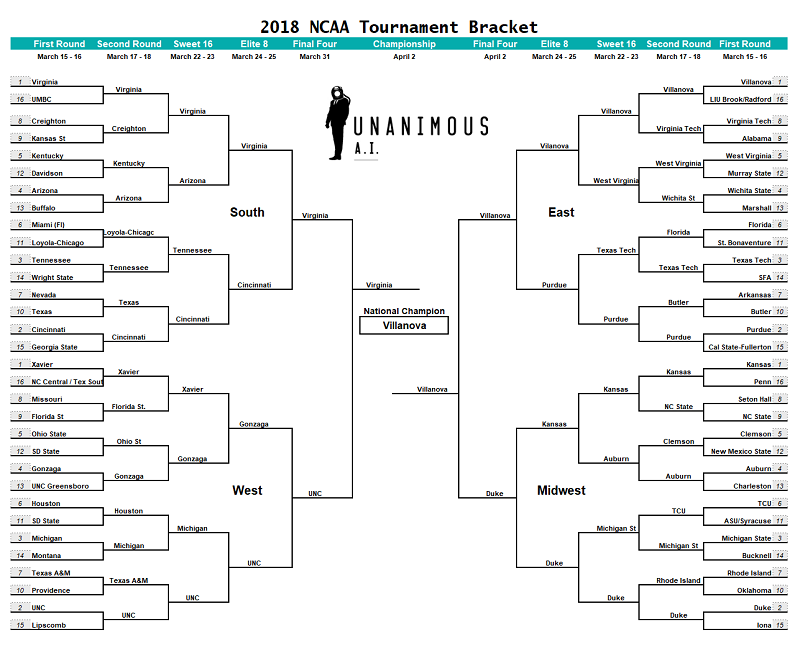 Though last year’s swarm was burned badly when Villanova – their pre-tourney champion prediction – fell in a memorable upset to a plucky Wisconsin squad in the round of 32. This year’s swarm paid that loss no heed and again picked the Wildcats to win it all, though not without some trepidation.

As you can see, the swarm barely liked ‘Nova to win in the finals over Virginia, but this is hardly a slam dunk (ahem). In fact, just as one large swarm wrapped up its picks yesterday, news broke that the Hoos’ super sub, DeAndre Hunter, would miss the tournament with a fractured wrist. Thus, though the first swarm liked the Cavaliers as NCAA champs, two subsequent confirming swarms –armed with the knowledge of that injury –picked Villanova to have One Shining Moment instead.

The swarm also was happy to stray away from the chalk this year. College basketball has had an incredibly turbulent year both on and off the court, and this year’s tournament could be fairly chaotic. One upset the swarm really liked was the red-hot Ramblers of Loyola-Chicago. They destroyed the competition in the Missouri Valley Conference tournament and the swarm thinks they’ll give the Miami Hurricanes all they want and then some.

The swarm also wasn’t blinded by the shiny aura of top seeded teams. In fact, they have Xavier bowing out of the tournament fairly early. Although future rounds of the tournament represent at best educated guesses that are contingent on victories in earlier games, the swarm envisioned Gonzaga as being a possible opponent that might end the Musketeers’ national title hopes.

Although Unanimous AI is proud to stand behind this bracket, it goes without saying that March Madness earned its name for the crazy way games seem to unfold this time of year. Thus, though a perfect bracket is mathematically possible, it seems impossible in practicality. (Last year one person came close, staying perfect through 39 games before finally crashing and burning completely.) Even though it is the longest of possible longshots, it won’t stop Unanimous AI from working hard to one day achieve that holy grail of sports predictions.