Baseball is a game made up of odd and quirky statistics, some of which defy easy explanation. For instance, the narrow run differential for the Seattle Mariners suggests that they should be a team just barely above .500, instead of the first place club in the American League West, 17 games over. It’s a statistical anomaly that will sort itself out over time: either Seattle will win more games more decisively to play up to their record…or they’ll find a true level well below where they’ve been playing.

The weekly Unanimous AI MLB Swarm had it’s own odd result to post last week. The good news? The swarm went 13-2 across all 15 games, which normally would be a phenomenal accomplishment. The bad news? The two losses were the swarm’s highest-confidence picks.  Neither of the two losing predictions were bad predictions (in fact, Vegas had those picks as their two biggest favorites as well), but sometimes baseball is just going to do baseball things. That said, the Baseball Swarm’s post-Memorial Day hot streak will hopefully continue with this set of forecasts for tonight’s games. 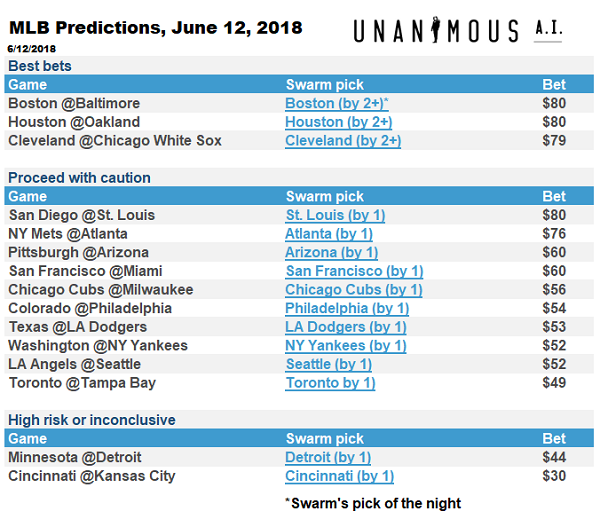 Speaking of data quirks and anomalies, you may have noticed in that chart that we’ve got two games with fairly high dollar confidences in the middle confidence tier. That happens when perhaps the swarm thinks further about the confidence it has in a game when it comes time to set a hypothetical “bet”. However, when the group makes a forecast for a team to win by 1 run, there are a couple of different metrics we need to “overrule” that, and they have to be fully consistent to override the doubt in that 1-run prediction. That didn’t happen in either of these cases, so those two games sit right on the cusp of high confidence/middle confidence.

On the other side of the coin, the swarm hedged few bets in once again going with the Boston Red Sox (playing in Baltimore against the last-place Orioles) for pick of the night honors. The replay above shows about as unified a swarm as the group ever gives us, a full consensus on the Red Sox. The only small wavering in confidence here is in the hypothetical dollar bet. After getting burned on Friday by a $100 bet on Chris Sale and the Sox that turned into a 1-0 loss, the swarm elected to temper that just slightly with 80 virtual dollars tonight.