The month of August started with the Boston Red Sox sweeping their New York Yankee rivals and moving 10 games into the lead of the American League East. That settled that, right? Well…maybe. That optimistic New York fans are now talking about their chances of winning the division is emblematic of how rapidly and unexpectedly a pennant race can change. Boston still holds a 6 ½ game advantage in the East heading into tonight, but things are certainly less of a foregone conclusion than they once appeared. Each week, the swarm of casual Major League Baseball fans has to be aware of these rapid changes in fortune and how they affect teams across the standings. Here are the swarm’s predictions for tonight. 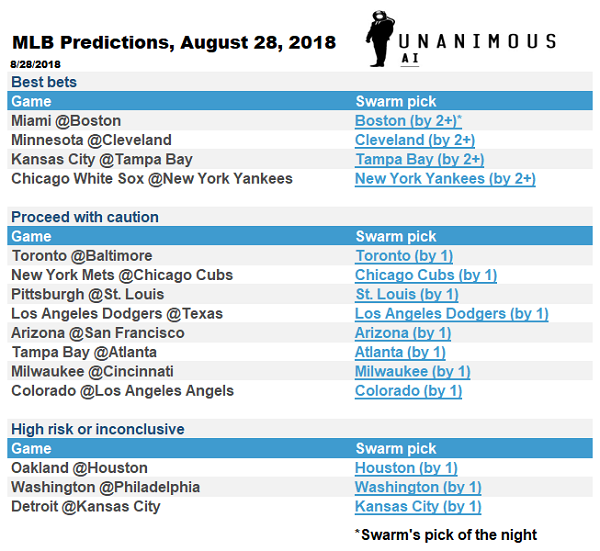 As the chart above shows, this week the Boston Red Sox return to familiar territory as the swarm’s pick of the night. Boston’s late-August swoon can likely be traced to playing through a tougher part of their schedule without ace pitcher Chris Sale, who’s injured. However, the last-place Miami Marlins might be just the cure to whatever’s been ailing Boston of late and the swarm definitely likes the Sox tonight at Fenway.

It would be natural for the swarm to feel some trepidation about picking Boston in this spot, favorable though it seems. And in the replay, there are a couple of magnets that appear to be a little skeptical. Even so, the internal swarm metrics show that this is the highest confident pick by organic measurement of the entire batch on the schedule tonight. Having the swarm affirm that by explicitly calling out this contest as their pick of the night only adds a level of conviction to this prediction.