The first six weeks of the 2018 MLB season set a record for games lost to bad weather. Those games just don’t magically disappear from the schedule, though; they’re games that have to be made up now, in the final third of the summer. That means that days off for teams can be few and far between, even as the pennant races heat up. Clubs with depth and an ability to call on fill-ins from within their own farm systems can flourish in the dog days of August, and the weekly baseball swarm’s ability to recognize these deeper, freshened teams is key to making accurate forecasts. Here’s how the swarm predicted tonight’s matchups. 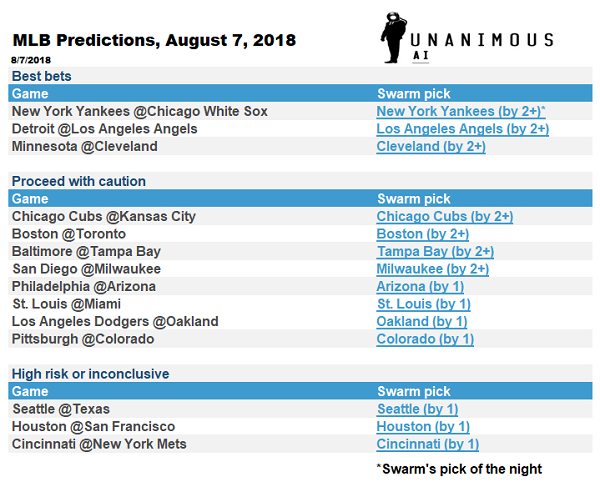 Although the Yankees haven’t been shy about using their minor leaguers as chips to make trades this summer, they’re still hopeful they possess enough depth to withstand the extended absence of slugger Aaron Judge. After a tough weekend in Boston, they’re back in action tonight against a Chicago White Sox squad that remains a few years from being able to compete for a postseason spot. The MLB Swarm thinks the Yankees are definitely in good shape for this game.

The replay above shows the single strongest pull the swarm had for any single game tonight, based on the number of magnets pulling to the New York side of the hex. That thinking is crucial in analyzing just how confident the swarm is for this contest, but if there were any doubts the swarm also assigned this matchup their pick of the night status, ahead of games featuring division rival Boston and Central-leading Cleveland.