Through most of the season, the external factors that may affect the outcome of an NBA game are typically related to injury factors, or rest or exhaustion of the teams playing. In the final month of the season, however, many fans note that another factor may come into play: teams “tanking”. That is, clubs trying to lose games to improve their draft prospects.

It’s something the NBA would like to pretend doesn’t happen, but it seems like a baked-in strategy that’s an inherent by-product of the lottery system. And though teams vehemently deny engaging in this activity, the Association has already issued a stern warning to the Bulls about tanking this year. Whether it happens deliberately or not, it’s a new variable that the weekly NBA Swarm has to be aware of. 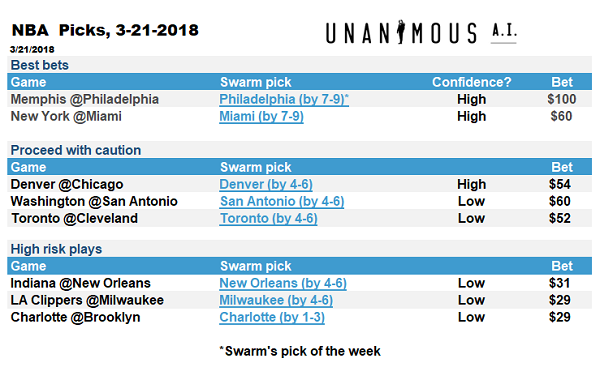 As the chart shows, the NBA Swarm sees a lot of close games happening tonight. The whole possibility of tanking may have helped raise Miami to a higher confidence tier, and may also have caused the swarm to favor Denver on the road in Chicago. In the case of the swarm’s pick of the night, however, it’s just as likely that a surging Philadelphia club hosting a spiraling Grizzlies team was the biggest factor.

With a strong finish, Philadelphia has hopes of jumping into the top four in the East and getting home court advantage in the first playoff round. Conversely, Memphis seems to have little to play for in this contest. In the replay above, the magnets form a fast consensus and take the puck to a “high confidence” Sixers win. The swarm assigned its maximum hypothetical wagering confidence to this game as well, before choosing it over the Miami game as its best bet on the evening.