If Thursday afternoon was a fairly calm start to the NCAA Men’s Basketball Tournament, the rest of the games over the weekend put the crazy back into March Madness.  Two pre-tournament favorites – Virginia and Arizona – were beaten in the first round, and in blowouts rather than buzzer-beaters. (Everyone knew the first win by a 16-seed over a number one would be a 20-point blowout, right?)

In fact, the Madness this March was downright historical. In the South region, none of the top four seeds advanced to the Sweet 16 for the first time ever in the 64-team era of March Madness. In the West things were almost as crazy, with both of the top seeds eliminated in the round of 32. That slew of upsets left tens of millions of brackets across the country in smoking ruins, and the swarm-chosen Unanimous AI bracket didn’t escape the carnage. Even so, the UAI bracket remains better than 89% of millions of brackets submitted nationwide to ESPN, and the Swarm’s pick to win it all – Villanova – is still active.

With the Sweet 16 set to commence play this weekend, Unanimous convened a new swarm of die-hard hoops fans to select a new bracket. The participants in this swarm had the advantage of not only being able to draw on regular season play by the remaining teams, but also could factor in performance during the Tourney’s first two rounds. 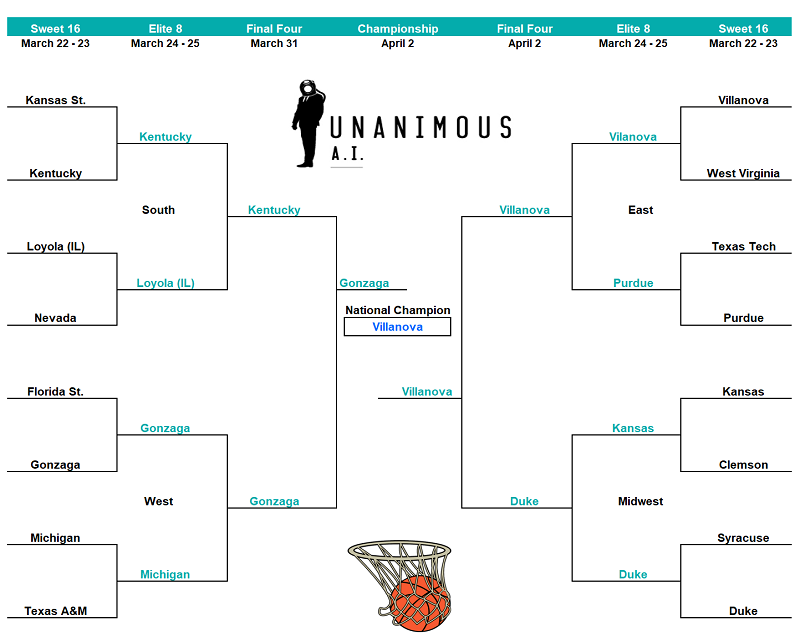 In considering the Sweet 16 round, the swarm faced a number of incredibly difficult decisions on matchups that appear to be complete toss-ups. However, even after all the upsets last weekend the swarm remains committed to Villanova. They expressed high confidence – as the replay below shows – that ‘Nova will win its Sweet 16 matchup with West Virginia’s high-pressure defense and track through the rest of the East region bracket.

In the Midwest region, the swarm forecasts two storied college basketball programs headed towards a potentially epic clash in the Elite Eight. In the Sweet 16, the swarm has Kansas getting past a resurgent Clemson squad, and predicts Duke to prevail in a fight of ACC zone defenses with Syracuse. Should that happen and set these two bluebloods to meet in the Midwest Region Final, the swarm gives the Blue Devils the slightest of edges to advance to the Final Four.

In the volatile West and South regions, the swarm thinks things set up pretty well for Gonzaga to make a run. The group picked Kentucky to emerge from the anything-can-happen South region, but has the Zags defeating them to go into their second straight championship game to face Villanova. Sadly for the Gonzaga faithful, if this matchup comes to pass the swarm sees them as a bridesmaid yet again.