The 2017 NFL season continues to be one of the most turbulent in recent memory. Whether because of injuries, aging, or just an inability to come together, teams are veering all over the place. Week after week, upsets dominate the schedule. Teams like Atlanta, Pittsburgh, and Buffalo seem to go up one week and down the next. And we won’t even talk about whatever happened to Denver on Monday Night Football last week against the Giants.

At some point, things are likely to stabilize somewhat in the NFL. The NFL Swarm’s 51 wins this year puts it in excellent shape to pounce as we move into the next phase of the season. In fact, that win total would be running in a tie for third among ESPN’s expert analysts. The swarm took a hard look at the weekend’s games and here are the winners they’ve predicted. 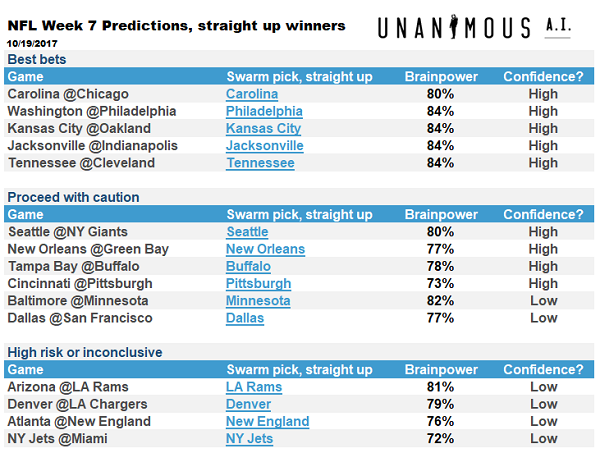 One of the swarm’s highest-confidence picks of the week is the Carolina Panthers visiting the Chicago Bears on Sunday. Chicago’s been able to ambush the AFC North teams on its schedule, dealing defeats to the Steelers and Ravens for its only wins this year. The Panthers have looked very good in their own right, however. The swarm put a high degree of confidence on the Panthers in this game. You can see the high confidence in the replay below, but it’s also worth noting now many magnets are pulling to the Carolina side of the hex also. The swarm made this their play of the week, and affirmed this as a Best Bet. 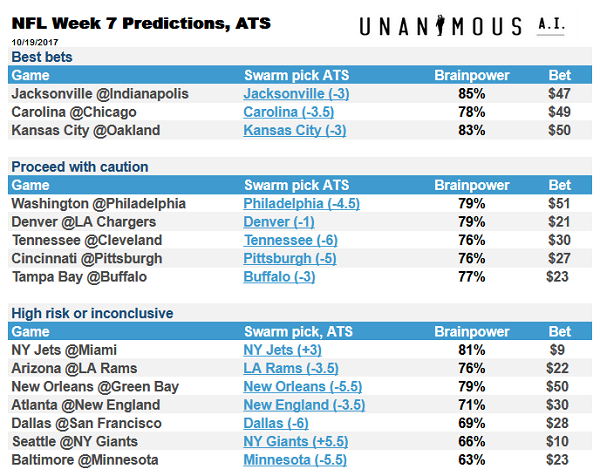 While it’s worth noting the swarm’s confidence in Carolina here again, another game that looks worthy of attention is the Jaguars contest against Indianapolis. Although the Jaguars have been up and down all season long, the swarm may have noted that the only two Colts victories this year were against winless teams. The swarm assigned a decent Brainpower to this pick and also was willing to lay a hypothetical wagering confidence down that correlates to a best bet pick.