One of the true joys for any fan whose team reachers the Super Bowl is the blissful two weeks of fawning coverage. Every player on the squad, from the quarterback to the long-snapper, will be featured and profiled, their high school English teachers interviewed. No stone will be left unturned in the attempt to find a new angle to make the most-watched spectacle on Earth even more worthy of our attention.

And yet, when a team goes to the Super Bowl as often as the Patriots do –  they’ve been to seven straight AFC championships, the Super Bowl four times in the last five years, and Tom Brady will playing in his 9th(!!) Super Bowl on Sunday – it can be difficult to get excited about the big game. Even the emergence of the high-scoring Rams and Jared Goff as only slight underdogs hasn’t prevented Super LIII from feeling just a little bit stale. So, how then to make the game more exciting? Why not convene a swarm of football fans and enthusiasts and turn them loose inside the Swarm platform to see if they can forecast not only the winner, but also some of the more high-profile prop bets? Here then is the full breakdown of the weekly NFL Swarm’s predictions for Super Bowl Sunday. 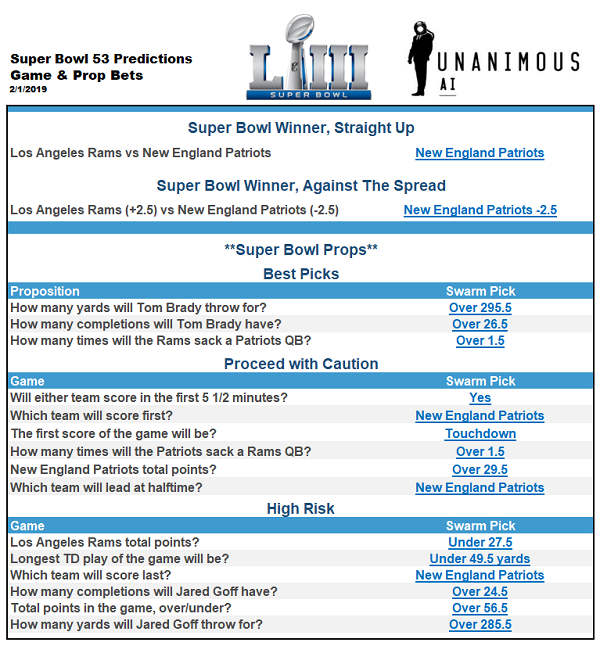 There may be no less controversial prediction than “Pats to win by less than a field goal” and that is exactly where the NFL Swarm landed. That said, given the fact that, at the time of this writing, sportsbooks were paying -140 for the Pats to win, and -120 for the Pats -2.5, the only responsible wager on the Pats must surely be on them to win, so that is where the AI’s recommendation will stand.

As for other ways to spice up the action on Sunday, Vegas has presented would-be wagerers with the usual variety of proposition bets covering everything from exotic, like the color of Gatorade to be dumped on the winning coach and who the MVP will thank first, to the expected, like the number of yards each quarterback will throw for. Here the NFL Swarm once again expresses its confidence in the ageless quarterback from Serra High School, forecasting that Tom Brady will surely exceed 26.5 completions in what is expected to be a high-scoring affair in Atlanta.

As we’ve done in years past, Unanimous AI will be comparing the results of this forecast to the individual participants themselves in an effort to determine whether or not swarming the Super Bowl results in the type of amplification of intelligence we’ve seen in so many other arenas.

Unanimous AI Nails 2020 Oscars with 88% Accuracy
Using SWARM AI, Unanimous Beats the Experts for Fourth Year in a Row.   The… Sportspicker AI Nails Super Bowl LIV Prediction
AI Model Concludes Remarkable Postseason Run The NFL crowned its champion Sunday as Patrick Mahomes…
We use cookies to understand how you use our site, personalize content, and improve the quality of our Services. By continuing to use this site, including staying on this page, you consent to our use of cookies. More information about how we use cookies can be seen on our Privacy Policy. If you choose to disable cookies, portions of this site may not function correctly.Accept