Every week, researchers at Unanimous AI challenge swarms of NFL, EPL, NBA and NHL fans to predict a full slate of matchups. And just as often, we hear from members of the swarm or the community at large who have used those predictions to win big. While we don’t make any recommended wagers here at Unanimous AI, we do task our swarms to not only pick winners, but also to give guidance into its relative confidence in each pick, since a key component of good forecasting is knowing when not to register a prediction at all.

As we’ve seen in recent weeks, those so-called Best Bets have been extraordinarily successful. Just a few days ago, we wrote in these pages that the NBA Swarm’s Best Bets ( which have been perfect over the past three weeks ) produced an handsome win for one lucky bettor, and that the EPL Best Bets had done even better, produced a 157% ROI for another member of the Swarm. 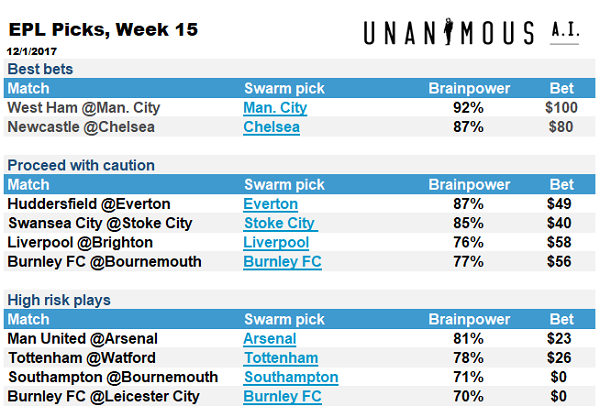 But, some members of the community like to take the swarm’s guidance one step further. For these adventurous souls, it’s not enough to pick a winner or two at a time. And, truth be told, when the swarm’s Best Bets are performing as they have been in recent weeks, there’s a lot of money to be made. First up is a member of the EPL Swarm who apparently likes to live dangerously. This person parlayed both of the EPL Swarm’s Best Bets for December 2nd along with the swarm’s “most likely to tie” matchup between West Brom and Crystal Palace. That rather exotic wager came through at the end of the scoreless draw, and turned a $5 bet into a nearly $85 payout. That’s a 1,580% Return on Investment.

Not to be outdone, another member of the EPL Swarm community placed a five-team parlay which included all of the EPL Swarm’s Best Bets and “Proceed with Caution” picks, including one game where the Swarm had predicted a 2 goal victory for Chelsea. That risk paid off with Chelsea’s 3-1 victory and a nearly 800% Return on Investment:

Of course, the swarm loves both football and futbol equally and our NFL Swarm has been every bit as hot recently as the EPL and NBA swarms. With that in mind, one member of the swarm put together a six team parlay that included all of the NFL Swarm’s Best Bets, which you can see in the chart below. 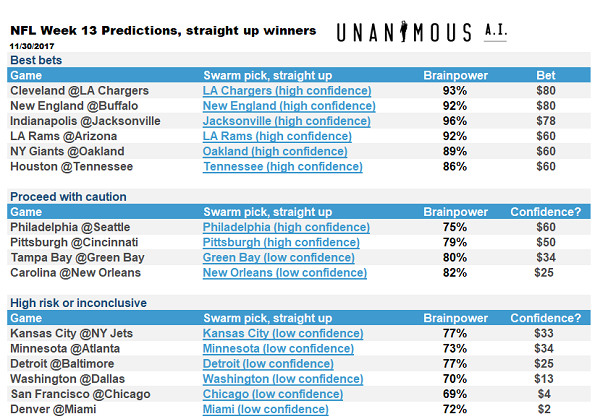 That courage was rewarded with an impressive 248% Return on Investment. This is also a great example of the Swarming knowing what it knows, and what it doesn’t, since it’s very hard to lose money when all of the Best Bets are winners.

Finally, the swarm is well aware of the challenges of winning Against the Spread in the NFL. As they say, “there are no points for pretty” in the NFL, and teams are happy to escape any matchup with a win. With that said, our researchers can’t resist challenging the swarm to pick each game Against the Spread. But, because our swarms are showing compelling awareness of the difficulty in picking Against the Spread, only two games out of over a dozen were deemed worthy of a wager. So, what would have happened if you’d used the swarm’s forecast to generate a two team parlay? Another 270% Return on Investment.

Naturally, no one here is claiming that every dollar that you wager with the swarm’s guidance will magically turn into sixteen. But, we are encouraged to see that, across the board, our sports swarms are demonstrating a remarkable ability not only to pick winners, but also to identify games where no prediction should be made. That ability is what turns forecasters into super-forecasters.

More importantly, our swarms continue to amplify the intelligence of the group above what any individual could repeatedly accomplish on their own. After all, this is why swarms form in nature, to help relatively simple organisms solve complex problems. Navigating the choppy waters of the NFL or EPL to offer consistently excellent guidance may not seem like the sort of life-or-death problem that faces hives of bees or flocks of birds, but we are relying on the same principles to produce actionable insight week in and week out.